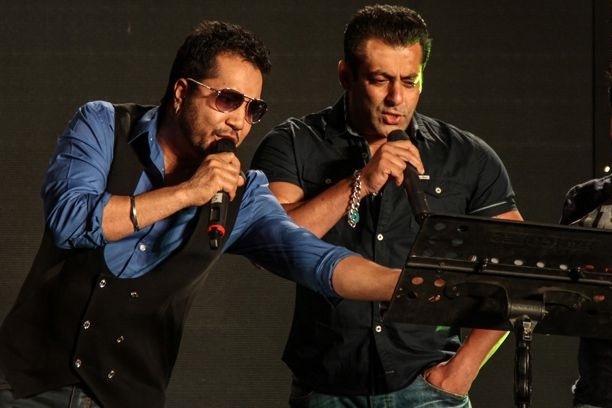 There was fun, glitz and Bollywood glamour "Bajrangi Bhaijaan" style as superstar Salman Khan joined singer Mika Singh to sing "Aaj ki party meri taraf se" during a promotional visit for his forthcoming film along with its team including co-stars Kareena Kapoor Khan and Nawazuddin Siddiqui here on Tuesday.

The "Dabangg" star turned on the party mode of the press conference as he entered the venue amid loud applause.

"Salman bhai wanted to sing the song," Mika said before picking the mike for the performance. While Salman chuckled: "Mika stole my song."

The film, which will hit the screens on Friday, has been extensively shot in Mandawa, Kashmir and Delhi. Kabir noted that coming to Delhi for promotion holds a special place in his heart for many reasons.

"It feels good to be back in Delhi because I'm from Delhi. So, coming to Delhi for promotions feels great," he told reporters.

Sami also sang some lines of his song of the film: "Bhar do jholi meri". But Nautiyal captured everyone's attention by crooning his number "Zindagi kuch toh bata".

The film narrates a story of a man out on a journey from India to Pakistan in his endeavour to take a dumb and mute young girl back to her home across the border. Along with action, music and dance, the high point of the film is its emotional factor.

"Bajrangi Bhaijaan" is Salman's second film with Kabir after "Ek Tha Tiger". And the 49-year-old actor shared that working with the director again was a "fun" experience.

"Working with Kabir this time was better than the first and I hope that our third outing will even be better," said Salman, who plays role of a Lord Hanuman devotee in the film.

Ever since the launch of the trailer, the little girl has mesmerised everyone with her innocence and sincerity. Salman didn't forget to mention the child star, who has an important role in the film. He lauded her dedication.

"Harshali Malhotra is very sweet. She is from Delhi, but has now shifted to Mumbai. She has done a great job in the film. She is very professional and focused," said Salman, who looked casual in a white shirt and black trousers with a shiny 'gada' (mace)-shaped pendant dangling around his neck.