View Profile
Hot B-Town property currently, Ranbir Kapoor has been growing real huge. He might have made his debut only late last year but he has already succeeded in scaring away the mighty Big B’s son! Must say, dropping the towel has helped a great deal!

Bachchan Jr’s ‘Drona’, which was to initially release on 15th August, has been postponed to a week later. The reason for the same is the big Yash Raj movie, ‘Bachna Ae Haseeno’ which, too, is releasing on the same day. 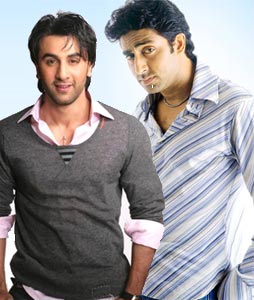 Well, Salman Khan’s ‘God Tussi Great Ho’ will release that day, too. But then the big bad boy isn’t scared. He’s got all the guts and doesn’t give a damn. Maybe he thinks he’ll come out the winner over Ranbir, very much like his character in ‘Sawaariya’.

Since ‘Drona’ is postponed and Bachchan Jr. is out of the picture, Kapoor and Khan will fight it out alone! This one fight will surely be worth a watch!

Now that Bachchan Jr. is slogging hard to achieve the brave superhero tag with ‘Drona’, it would have been saner to actually portray a strong image in real life, too!

The major fan following of Ranbir Kapoor is actually forcing Goldie to delay the film. The fear of his movie getting sidelined by Ranbir’s ‘Bachna Ae Haseeno’ has left him at his wit’s end!

Can’t blame the poor guy either! His last film so many years back, ‘Bas Itna Sa Khwaab Hai’ had fallen flat on its lousy face and Abhishek’s so called ‘star power’ achieved nothing at all for him! Obviously, he doesn’t want a repeat of that!

The Bitch’s source, who happens to be trade analyst, says, “‘Drona’, even though is much awaited, will be sidelined because Ranbir is super hot amongst the girls now. Sallu has a huge fan following, too. It’s Abhishek who is not been getting much fan love these days and his movie will suffer if released on the same day."

But come what may, the Big Bachchans always like to put up a brave front (damn whatever else they feel on the inside!). This is something their close family friend understands well and hence chose to remain unavailable for comment!

So as Bachchan Jr. rests safe in his wifey and Ma’s laps, Ranbir Kapoor, along with Minissha Lamba, Bipasha Basu, Deepika Padukone, will battle it out with Salman and Priyanka Chopra!

The fact is that ‘God tussi Great Ho’ was initially due to release on July 18th but due to certain technical problems the release date was pushed further to Aug 15th! It suits ‘good at fights’ Sallu quite well!

AB Baby and his director Goldie Behl who are chickening out big time, need to take a leaf out of his ‘fighting’ book!

By the way, Ranbir is not good at the competition yet either. He just couldn’t handle the tough competition from SRK’s ‘Om Shanti Om’ that fateful Diwali day, if you remember. In spite of all the marketing and Sanjay Leela Bhansali’s big scale desperation!

That track record hasn’t been enough to soothe Abhishek’s nerves! So you know who’s the biggest coward around here is!