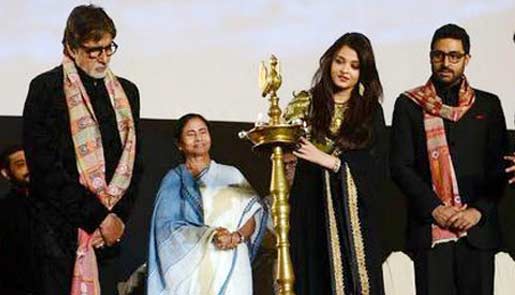 Bollywood screen icon Amitabh Bachchan and his family not only fired-up the inaugural ceremony of the 20th Kolkata International Film Fest but they also strengthened and renewed their ties with West Bengal.

Draped in uttariyas (stoles) gifted by Chief Minister Mamata Banerjee, the Bachchan clan comprising Amitabh, his wife and veteran actress Jaya, son and actor Abhishek and actress-daughter-in-law Aishwarya, set the evening on fire with their oomph, charisma and reiteration of their links to Bengal.

Jaya likened the event to a family function and hoped her granddaughter Aaradhya would someday take the stage with them.

"For us it's become like a family function. Though our family is not complete ... amader poribarer ek sodosyo ghumacche (one of our family members is probably sleeping).. hopefully in time to come she will be able to participate," Jaya said referring to the newest member of the family.

"Then our family will be complete," said the ecstatic actress.

A Bengali, Jaya started her career in Satyajit Ray's Bengali film, "Mahanagar" at the age of 15.

The crowd cheered and roared while she spoke in her native language.

"I have never ever seen the way any audience reacts as they do in Bengal. The kind of response you have here... this is the best audience in the world. You need a huge appreciation from all of us here," she went on.

Aishwarya, the former beauty queen, echoed her mother-in-law and complimented the orchestra's performance during the ceremony.

Big B had a lot to share with the people.

"Aapnader jamai babur nomoshkar (Greetings from you son-in-law)," he began as the spectators listened in rapt attention.

"I am delighted to be here with Jaya, who you lovingly call as your 'Dhanyi Meye' but also your naati (grandson) and naath-bou (grand-daughter-in-law)," said the 71-year-old. "Dhanyi Meye" is a superhit Bengali comedy made in 1971, in which Jaya had played the title role as Matinee idol Uttam Kumar's sister-in-law.

"All four of us have had the very proud privilege and distinction to work with Bengali directors - the most esteemed and very reputable directors. We hold that experience in great regard and greatly respect Bengali cinema and the filmmakers," he said.

Big B acted in Ghosh's "The Last Lear", Jaya in "Sunglass", Aishwarya in "Chokher Bali" and "Raincoat" and Abhishek in "Antarmahal". 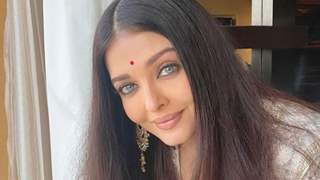