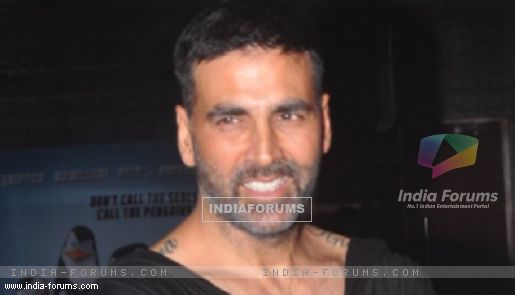 After impressing audiences and critics with his army officer act in "Holiday - A Soldier Is Never Off Duty" in 2014, Bollywood's action star Akshay Kumar is once again broaching the subject of terrorism in his forthcoming film "BABY". He says the intent is to discuss these issues "openly" to spread awareness.

If "Holiday - A Soldier Is Never Off Duty" was about sleeper cells, "Baby" revolves around a story about how the common man in India faces a threat from terrorists and how the government tries to prevent such attacks.

In a tete-a-tete with IANS, Akshay, looking casual in a sweatshirt, jeans and a beanie, opened up about the movie and his action avatar.

"I'm playing an undercover agent in the film. We are a group named Baby, which includes Anupam Kher, Rana Daggubati and a few other actors."

Akshay is happy with the end result of the film, directed by Neeraj Pandey, who had helmed "A Wednesday!", a movie that was about the impact of terrorism on the common man.

" 'BABY' is a well-carved film. It talks about terrorism, which is a big consideration in today's world. Terrorism, as a topic, can be seen in every newspaper. So we thought of making people aware about it. The film talks very openly about it. The story of 'Baby' is inspired by various real life incidents," he said.

The movie will see Akshay packing in a punch as far as his action scenes are concerned.

But while his stunts and action-packed performances in films have given him the tag of 'Khiladi', the 47-year-old actor says that his versatility "is not just limited to action".

"I have played different roles in my career. It's not just limited to action. For example, 'Bhool Bhulaiyaa' was a horror film. 'Namastey London' was a romantic one. Also, I have done many comedy films. However, a lot depends upon viewers' taste. People love to see me doing action films," said Akshay, adding that he'd love to romance on screen if not do a lot of action.

Talking about his romance with real-life wife Twinkle Khanna, with whom he celebrated 14 years of marital bliss Jan 17, Akshay was quick to give some suggestions for a happy married life.

"Whenever you get time from your work, do spend it with your spouse. Do things together. Try to act as two friends rather than being a husband and wife because it will help you in strengthening your bonds," he said.

It's no wonder he's doing that - and enjoying it.

On his anniversary, Akshay had tweeted for Twinkle: "After 14 years of listening to the same old jokes of @mrsfunnybones I still wait to hear more!"

Together, they have a son Aarav and daughter Nitara.