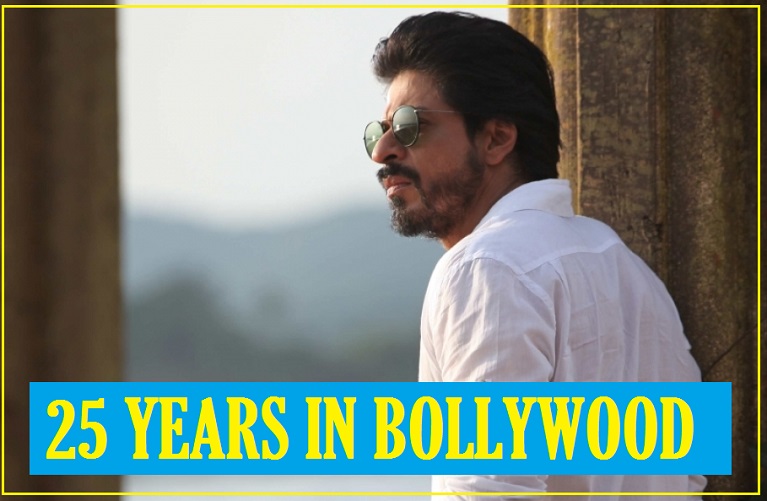 He ventured into Bollywood in 1992 with the film "Deewana" and ever since has given several cinematic jewels like "Dilwale Dulhania Le Jayenge", "Kuch Kuch Hota Hai" and "Kabhi Khushi Kabhie Gham" among many others. Supestar Shah Rukh Khan, who is fondly called the "Baadhshah" of Bollywood by his fans, has completed 25 years in the Hindi film industry.

Shah Rukh began his career with appearances in several TV shows like "Fauji" and "Circus". He got his Bollywood break with "Deewana" in 1992. He later went on to play anti-hero roles in films like "Darr", "Baazigar" and "Anjaam".

He then rose to prominence after starring in a series of romantic films, including "Dilwale Dulhania Le Jayenge", "Dil To Pagal Hai", "Kuch Kuch Hota Hai", "Mohabbatein" and "Kabhi Khushi Kabhie Gham...". He was lauded for his portrayal of an alcoholic in Sanjay Leela Bhansali's "Devdas", a NASA scientist in "Swades", a hockey coach in "Chak De! India", and "My Name Is Khan".

Shah Rukh took to Twitter on Saturday night and wrote: "Went to bed early because been a hectic week. Woke up for no reason and realised I am 25 years old. Will deal with all this love tomorrow. Thanks for bearing me."

For his contributions to the entertainment industry, the Indian government honoured Shah Rukh with the Padma Shri, and the Government of France awarded him both the Ordre des Arts et des Lettres and the Legion d'honneur.

His close friend and filmmaker Karan Johar thanked the superstar and said that he had an honour to collaborate with him.

"Have had the honour of working with him for 22 of those 25 years. Love you so much bhai. And thank you for everything," Karan tweeted.

jasmeet92 3 years ago Many Many Congratulations For Completing Your 25 Golden Years In Bollywood. Giving Us So Much Wonderful & Inspirational Movies. Thank You Badshaah Khan :)

Vartika07 3 years ago I wish u more 25 successful years in Indian Cinema SRK.
I love u since past 25 years and will always love u until I am alive.

Arnav.Raizada 3 years ago SRK is the best. Congrats on a wonderful journey

Kareena Kapoor Khan is all praises for husband Saif Ali ...
33 minutes ago

Sushant’s sister Shweta is Proud of her brother as he says, ...
36 minutes ago