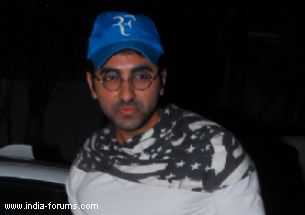 Actor-singer Ayushmann Khurrana has teamed up with mentor John Abraham for a period drama.

John had launched TV VJ Ayushmann in Bollywood with his maiden home production "Vicky Donor" and the fun film on sperm donation turned out to be a roaring hit in 2012.

"We are coming up with "1911" with John and Shoojit Sircar. John and me are playing a parallel lead in the film. It's a period drama. The film will be shot widely in Kolkata," Ayushmann told IANS.

A football drama, "1911" is based on both the popular football clubs - Mohun Bagan and East Bengal. John has said that the film will go on the floors in October and described it as a combination of "Lagaan(2001)" and "Chak De India".

Rhea Chakraborty did not name any Bollywood actors during ...
6 minutes ago