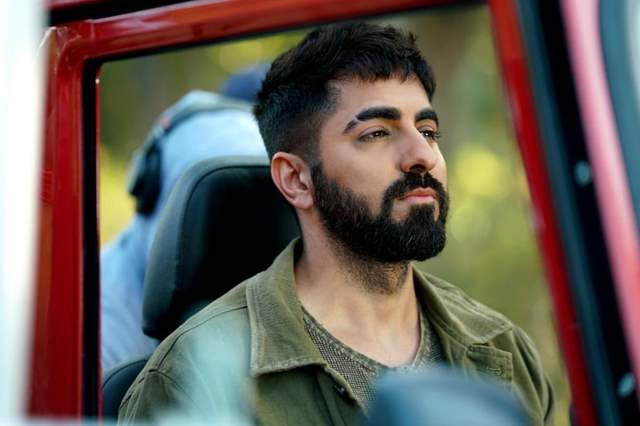 Bollywood star Ayushmann Khurrana hit headlines again with the announcement of his next, ANEK, being directed by acclaimed film-maker Anubhav Sinha.

In the first look that was released, Ayushmann is seen sporting an eyebrow slit and the actor reveals how he took this idea to his director.

Ayushmann, who plays the character of Joshua in ANEK, says,

I have been fortunate enough to collaborate with film-makers who have always encouraged my creative inputs to their vision of storytelling. The eyebrow slit that I’m sporting in ANEK was an idea that I discussed with Anubhav sir. It was about creating a distinct look that audiences have never seen me in and I’m glad that people have taken notice of this and are discussing it.

I have to thank Anubhav sir for being open to my suggestion and that’s what makes our creative partnership so exciting. I have always been an eager artist who wants to contribute towards building my character and how it will look on screen.

Ayushmann has always been vocalizing his ideas to his directors in the recent past. He says,

I always make these mental notes and discuss them with my director. Like in Shubh Mangal Zyada Saavdhan, my character wears a nose ring. I had bounced this idea with Hitesh (Kewalya) and Anand Rai sir and I’m glad they took this input on board. Similarly, Shoojit sir was happy with the idea that I wanted to have a lisp in Gulabo Sitabo.

I like to be an active voice when I team up with someone, discussing everything under the sun about my character and the film. I feel invested if I openly speak my mind and thankfully I have always had film-makers who have appreciated what I bring to the table.

So far not much has been revealed about the film, Anek but from what we know, the film has gone on floors in the North East region of India and a source close to the production has revealed to us that ‘Anek’ is going to be Anubhav’s most expensive and big-scale film till date.

Anek is directed by Anubhav Sinha and produced jointly by Sinha and Bhushan Kumar of T Series.