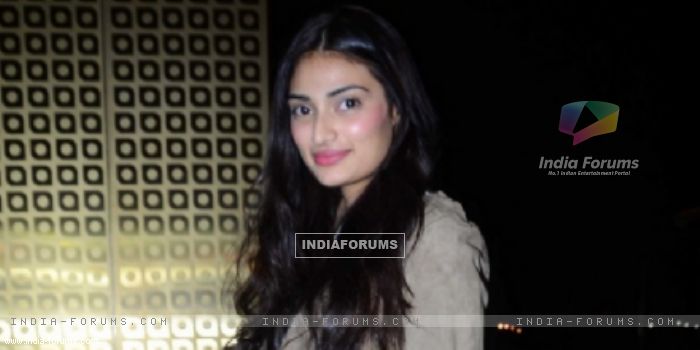 Actress Athiya Shetty, daughter of actor Suniel Shetty, says the biggest disadvantage of being a star child is facing criticism of nepotism.

"There are advantages and disadvantages of being a star child. You see, I get a lot of love and appreciation from the elders of the film industry as well as from the media fraternity by default because of the goodwill that my father has earned," the "Mubarakan" actress told IANS here.

"People waited for my debut. But at the same time, the biggest disadvantage of a star child is facing criticism of nepotism," added Athiya, who made her acting debut in Bollywood with Salman Khan's production venture "Hero" in 2015.

She added: "Yes, we get the first opportunity easily, but we are in a profession where without talent and most importantly without audiences' appreciation, our career cannot last long."

According to the actress, getting an opportunity to work with an ensemble cast, including actors Arjun Kapoor, Anil Kapoor and Ileana D'Cruz, and a director like Anees Bazmee that too in her second film is quite fortunate.

"He is one of the focused directors who knows how to treat each character of the story with equal importance. There is no room for outdoing each other. It's everybody's film and lets his actor be free in front of the camera which was very important for me as a new actor," she said.

"This ('Mubarakan') is my second film and it is a comedy film with a heart so, there are various shades of emotions. I felt so privileged to be a part of such a film," added Athiya.

Asked about what was her moment of "Mubarakan", she said: "Oh that has to be my first film that I signed on my 21st birthday. I signed it on November 5. That was like a double 'Mubarakan'. It was my new beginning as an actresshopefully, the journey continues."

Apart from acting, she has also featured on the cover page of fashion magazines and fronted ads of cosmetic brands.

"I was the most tomboy kid everwearing chappals and pyjama and running around. If you think I look nice in a certain style or dress, it is because of my confidence that I carry with

"Rest of the credit should go to my stylist. In this whole thing of 'fashionista', my mother is the most surprised. She looks at me and keeps saying 'What happened to you?' 'Where is this fashionable girl coming from?'"

priyanka... 3 years ago so according to her she got her second movie coz she was appreciated by audience in her first movie LOL