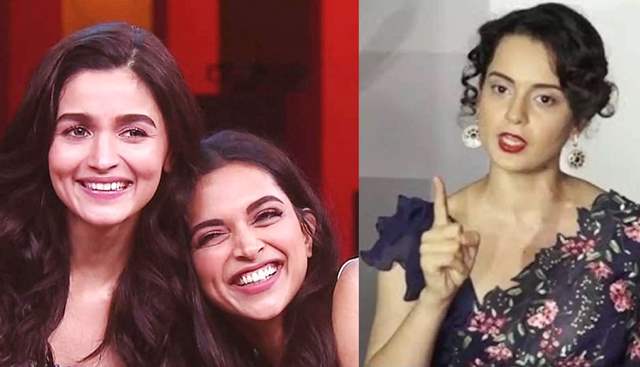 In a recent interview Kangana Ranaut exposed a lot of ugly truths about Bollywood's A-listers and their attitude towards outsiders while speaking about Sushant's sad demise. She came forward to talk about the support she got from Sushant Singh Rajput when no one else had her back.

She said in the interview, "He must've gotten scared seeing how they humilated me at IIFA, London."

While Bollywood's nepotism racket has now been exposed to the larger public, there is still no discourse on how their awards functions are a big scam to scratch each other's back.

Kangana opened up a discussion about the unfair practice of baseless nomination and selection without merit. She acknowledged that Deepika atleast had the sense to not accept the award when she got it for Happy New Year and she accepted that Queen's performance was better, but Alia had no shame accepting an main lead award for a 10 min role for gully boy.

In a rather fiesty discussion, she claimed that  Mahesh Bhatt has never been her mentor,  and instead it was Anurag Basu who found her.

She talked about how her choice of films was always based on the strength of a script and said, "If I wanted money and fame I would have worked with Salman Khan and Aamir Khan by doing this I am making more enemies than friends."

We all have heard about the witch hunt that was initiated against Kangana a few years ago where she was disrespected as an individual and a woman. Talking about those tough times she recalled how afraid she was, "I was afraid initially Bajendra called me Chudail, a Sex dadict and a Drug Addict, tried cutting me off financially and from getting any work."

In a bold move to call out even the contemporary outsider actors like swara and Taapsee, she revealed how they defended nepotism and were constantly buttering people but still don't get big offers. Whereas Sushant's downfall was caused by these Bollywood bigwig mafias who suppressed him because he had self respect and wouldn't suck up to them.

"The film "Drive" pulled him down and destroyed his career and I refuse to believe that Karan Johar had no ability to release the film drive", she said.

In an urgent call to action, she says that there should be police complaints filed against Mahesh Bhatt and Karan Johar. Sanjay Leela Bhansali chased Sushant Singh Rajput for two films for five years, but YRF didn't allow it, so Kangana raises the question of why Sushant wasn't compensated.

Kangana said she was ready for a panel discussion with exhibitors and produces on this topic as this is not a battle. "A boy has committed suicide due to bullying and people who are standing for him are being summoned", she added.

She said Karan Johar hosts a gossip show and the reason why he gets trps is because there is an audience for lynching of outsiders. She added, Karan Johar has not struggled he got his own studio and  at the age of 24 Shahrukh Khan and Kajol were his first actors.

"This is not my fight I am fighting so that society which has no voice currently", Kangana exclaimed, "At the end of my career I want to look back and think ok that I did what I could", she signed off.

LeviOsAa 23 days ago What happened to these talks during Jiah Khan's case. She told no one can be blamed for some one's suiside. She is making it about herself as always

RapChick101 26 days ago The thing is that, nepotism isn’t sickening but killing off ones career to fuel another’s, is positively disgusting. I agree with certain things she said about queen being a fine fine fine performance, and obviously Deepika (as good as she is) declining an award for happy new year, and to an extent Alia winning one for fully boy too. But that does not mean Kangana should make this all completely about her. That looks bad. Real bad.

thesheowl101 27 days ago Kangana Ranaut is making this all about herself. Nepotism does exist and it's an evil. We all agree with that and that Sushant Singh Rajput's death may or may not have something to do with it. But I don't know how she is planning to get rid of it. And she is fighting for society? This is not a social issue. This is a career issue. And nepotism exist in every single career path. And she can't bring any law against casting star kids over new comers. You can't blame a kid for wanting to follow their parent's foot steps and you can't blame their parents for looking out for them. And these people who are supporting Kangana Ranaut against nepotism and star kids are the same people who discuss Aryan Khan's mismatched shoes in group chats