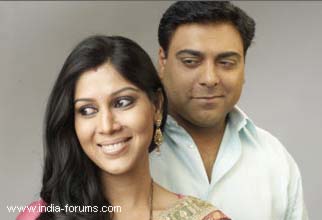 New Delhi, Sep 22 Priya Sharma and Ram Kapoor are on the wrong side of 30 and 40 respectively and romance blooms late in their lives. But if the lead characters of 'Bade Achche Lagte Hain' get a new beginning, so does the audience which is finding solutions to real life problems in the unconventional TV love story.

Priya-Ram's marriage is a compromise, but the awkwardness between them, the bantering, the tiffs and, at the same time, the faint signs of attraction are making people connect to them. The characters are played by Sakshi Tanwar and Ram Kapoor.

Reema Sharma, a housewife, said the 'concept of the show is very sweet. The way both Ram and Sakshi interact with each other is beautiful. You can actually relate to the characters. The recent plot, when all the pre-wedding preparations were shown, all of it was so realistic.'

Set in Mumbai, it is a fictional drama, but many feel it has a real life connect - it shows class difference, the blues of arranged marriage, family pressures and so on.

This is an offering from producer Ekta Kapoor, who has tried to introduce a new kind of drama on the small screen, which is still reeling under saas-bahu sagas.

Though there are some loud characters in the show like Priya's mother and some scenes are over the top, Priya-Ram's relationship - and chemistry - is making people sit up and take notice.

For 23-year-old media professional Harpreet, the show has become an addiction as she finds 'the storyline relatable. I like the way the innocence of the relationship is being projected.'

'Both Ram and Sakshi are really good actors. The way they are playing their age and showing real issues one faces in real life is very adorable. I simply love the strange expressions both of them give,' Harpreet told IANS.

A late night show, the 'Bade Achche...' opening episode got a lukewarm response at a TRP of 1.3, but gradually its audiences widened and the 10.30 show's latest rating is 3.9.

'There is no denying that Indians are obsessed with marriage and the pressure of settling down with someone never ceases even if you cross 30,' said Abhishek Sharma, 29, an IT consultant.

'The show shows it very clearly. From whichever section of society you come from, this topic will be discussed. But the way the show is turning out - the inhibitions of arranged marriage, difficulties in adjusting after a certain age, the social pressures - everything has been very close to real life,' he said.

'Bade Achche...' has its share of typical saas-bahu plotting and planning and menacing characters, but some viewers find solutions to their real life blues.

'The show has been of great help to me personally. At 30, I have been regularly pressurised by my parents to get married, but I coaxed them to watch the show. Now they realise there is a completely different world out there,' Varanasi girl Jyoti Rokri, who is working as a public relations official in the capital, told IANS.

'Marriage is no more about age; it is more about finding the right partner and that can happen any time. And the best and the most important aspect of this show is Sakshi Tanwar, who is above 30 and unmarried; so she is very relatable,' she added.

Some viewers fear it may meander and become predictable like Ekta's other highly popular 'Pavitra Rishta'.

'So far the storyline is good. I just hope that Ekta Kapoor, who has a tendency to drag an interesting show unnecessarily after a few episodes, doesn't do the same to this one as well,' said Harpreet.