COLORS' Bigg Boss will air the Faisle Ki Raat episode tonight wherein one of the three nominated contestants, Shweta Tiwari, Veena Malik and Begum Ali will bow out due to the verdict of the junta. But before the news of the elimination comes out, TellyBuzz brings you some exclusive news on a certain conversation between Salman Khan and Ashmit Patel which will be aired tonight. 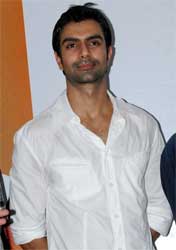 A source says, "As the housemates are seated to hear the one name that will go out of the house, Salman gets into a casual and light-hearted talk with the chocolate boy Ashmit Patel".

We hear that Salman asked Ashmit about the one name from the Bollywood industry with whom he would love to go out for a date. To this, Ashmit takes the name of Preity Zinta, and says that he had once met her during the Holi bash organized at the residence of Mr. Bachchan, and that is where he got introduced to her. He had then told Preity that he would be there for her if at all she does not get a guy of her liking.

Our source further says, "Salman then asked Ashmit about the girl from the Bigg Boss house who he would love to date with. While all expected the answer to be Sara Khan, Ashmit shocked everyone by naming Aanchal instead. As a passing comment, Ashmit also said that Aanchal is 'Malaai Maarke' and he loves Malai".

Will Salman leave it at that? Well, his next question to Ashmit was, why not Sara, to which Ashmit says Sara is just like his daughter, and she even calls him 'Pops', and that she is very sweet and innocent.

We hear that Sara's face really turned pale on hearing this reply coming from Ashmit. We now wonder what exactly were those happy moments that Ashmit shared with Sara?

Last but not the least, the buzz is that Sambhavna Seth will come as a celebrity guest in tonight's episode of Aakhri Salaam…

+ 2
10 years ago SALAM, salman u r my jun and 9 day 22 hours pehlay i wish you many many happy returnes of the day.love you so much.... salman i am big fan of you salman.AIMA FROM PAKISTAN

+ 5
10 years ago Well wht can v say if Ashmit chose Anchaal over Sara den its up 2 him. V can't rlly say much bout it.

10 years ago TRP baba ki jaii! watever takes place on these shows is all scripted and just for the sake of TRP !!!!

+ 2
10 years ago TRP that's all it was! UFF! These people will do anything for publicity!