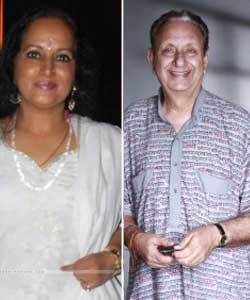 After making cult shows like Zee TV's Chhoti Bahu - Sawar Ke Rang Rachi, Maryaada Lekin Kab Tak? on Star Plus and Parvarrish - Kuchh Khattee Kuchh Meethi on Sony TV, D J's Creative Unit is now working on its next venture on SAB TV. The concept and title of the show is already out in the media and Tellybuzz to brings to you exclusive buzz about the show.

A little birdie informs Tellybuzz, "The show is all about a NRI family who is forced to come back to India after many years and the whole drama how the family is convinced to reside  in India. A seasoned veteran actor, Arun Bali and Himani Shivpuri would essay a couple, who force their kids living abroad to come back to India."

"Arun Bali and Himani are the only major reasons why the family comes down to India" ,adds the source.

We contacted Arun Bali and he confirmed, "Yes, I would essay the head of the family." While Himani Shivpuri too confirmed the buzz, she remained silent about further details.

Watch this space for more details on the show.

avinashrubina. 8 years ago dj has given the televsion industry the most loving serial ever choti bahu so wish them luck for this new venture

pallavi25 8 years ago Tony and Diya Singh have always given us great shows, right from Banegi apni baat to LRL, Jassi, Bhaskar Bharti to Maryada and Parvarish! They have launched more actors careers than even Ekta did!

Pirated_Fun 8 years ago DJ's shows are always good .. Parvarish and Maryada the only hindi shows i regularly watch .. Coincidentally they both are from DJs ...

sia_lovely 8 years ago Indeed, Choti Bahu is one of their fine products :)

'Billions' Renewed For Season 6
2 hours ago