Star Plus’ next innovative and differentiated programming for the viewers is Contiloe Productions’ Arre Deewano Mujhe Pehchano, a show that is free from cliches of emotional outbursts at eliminations and unnecessary melodrama, and engages with a rich dose of laughter and fun. 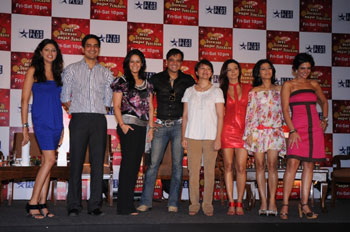 Featured Video
Premiering on January 2 at 10 pm, Arre Deewano Mujhe Pehchano is an innovative reality show which is a fusion of celebrities in disguises, tricks, fun and laughter. Each episode is packed with refreshing and original humor created by the ensemble celebrity cast. The format of the series is that of a comedy show created with candid cameras, playing silly pranks on unsuspecting subjects capturing people’s reactions.

A live animated character, Ghadhashri, will more than make up for judges’ reactions. This unique animated character is a donkey that carefully scrutinizes each gag and gives his expert comments, making it a hilarious treat to watch. Each week, renowned names from the entertainment industry will give Ghadhashri’s company and watch the antics of our disguised celebrity contestants.

These eight celebrities will hoodwink common people, family and friends through the use of disguise at pre-decided locations. The disguise is not just in terms of costumes and make-up but also the overall acting ability, mannerisms and their accents. The fun and humor of these gags will be compounded by the in- studio element of stand-up comedy.

There will be no eliminations in this show, resulting in it being free of hackneyed dialoguebaazi, walkouts, back-biting and stress.  Every week, one celebrity will win the title of “Master of Disguise” which will be decided by the voting done among all the eight contestants. There will also be no judges.

With this show, STAR Plus’s attempt to break away from the stereotype of a typical reality show and provide its viewers entertainment to unwind on the weekends.

Talking about this format, Anupama Mandloi, Senior Creative Director, STAR India says, “Disguises always create talking points, generate curiosity and bring an element of humour and fun. We decided to put together some of the best names in the field of entertainment, and design a show in which the viewer will get to see a myriad disguises donned by these celebrities, who are out to con unsuspecting people. This is peppered with stand-ups and our very own Gadhashri … a very expressive animation character will ensure that the STAR PLUS viewers are in for enjoyable weekend viewing.”

So grab your microscopes, exercise your cheeks and get ready to be entertained by our disguised celebrity contestants who only say: Arre Deewano Mujhe Pehchano! Every Fri-Sat at 10 pm, only on Star Plus

+ 2
13 years ago yayy Mona i well watch this because of her!
she is too good mwahh..

13 years ago wowwwww yash in reality show.will definitly watch n mona is also there so definitly the show rocks.n thanx 4r the information

13 years ago wow its great fun
i''m with Mona singh