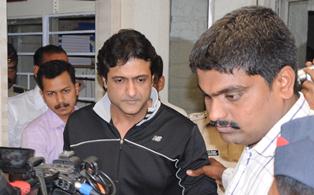 Actor Armaan Kohli, who was arrested for allegedly assaulting British singer-actress Sofia Hayat in the 'Bigg Boss Saath 7' house, has resumed his stay in the reality show after completing legal formalities on Tuesday, said a spokesperson of channel Colors.

The show went on air on Colors on September 15.

Armaan was one of the 14 contestants who entered the show.

The actor, who was seen in movies like 'Virodhi', 'Aulad Ke Dushman' and 'Jaani Dushman: Ek Anokhi Kahani', has been in the spotlight for his bad temper. That is what also embroiled him in the legal matter.

Sofia's complaint was the result of an argument that broke out between the two and Armaan ended up hitting Sofia with a mop, which left her injured.

Armaan was arrested from the 'Bigg Boss' house post 11 p.m. Monday night following a complaint lodged by Sofia at the Santa Cruz police station on December 11.

He was released by police here on bail of Rs.50,000 and two sureties of like amount, his lawyer said here on Tuesday.

According to the Lonavala police official, Armaan has been booked under Sections 324 (voluntarily causing hurt by dangerous weapons or means), 509 (word, gesture or act intended to outrage the modesty of a woman), 354(a) (sexual harassment), 294 (sing, recite or utter any obscene song or word) and 504 (intentional insult to provoke breach of peace) of the Indian Penal Code.

The show, hosted by Bollywood star Salman Khan, features celebrities from different walks of life who are made to live together in a secluded house with over 80 well-placed cameras prying on their activities 24X7.

taz15 6 years ago Good!! Hope he pays for it!! The rich dad's spoilt brat needs to be taught a lesson!!! For goodness sake he snatches a chair from underneath Tanisha, the supposed women he consider a friend! wth if he treats his female friends like this on a show imagine in the outside world how he treats his females????!!! No restrictions no nothing!!

*Dev.* 6 years ago this is the Worst thing ever happened in BB7 . BB is not fair as well.

Yuvika_15 6 years ago this was expected...his arrived at BB7 and that's when his car was attacked by women throwing stuff at him... I think BB7 should evict him in the next eviction - its the best thing they can do.

Willy_Wonka. 6 years ago How can they do this :( seriously this Armaan deserves to live in jail forever bloody women abuser :( Bigg boss sucks seriously :(

_Puh_ 6 years ago This abuser has yet got guts to come back, now lets c wht he tries to potray to the audience for the remaining days since he must have got some hint of wht majority think abt him outside? This guy has no shame at all lol!

ZiyaGautamholic 6 years ago Can this angry freak be thrown out instead of Kushal????????
Just throw him and tanisha out of the house...
BB is getting really unfair...
Really unfair...

BerryBlush07 6 years ago is there any other way this guy can get evicted..! i srsly dont want to strain my eyes looking at him for 1 hr!

Asmi2013 6 years ago the criminal is back in bb house where hinsa ke liye koi jagah nahi hai!!!!!!