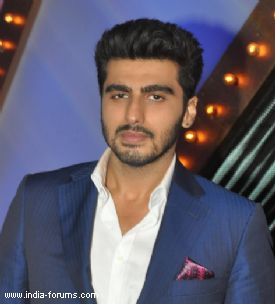 Actor Arjun Kapoor, known to be a reserved actor, talks candidly about his relationship with his father and filmmaker Boney Kapoor. He says their bond got stronger on the sets of "Tevar".

Being helmed by first-time director Amit Sharma, "Tevar" is being produced by Boney and features Arjun and Sonakshi Sinha in the lead roles.

"Obviously the bond becomes stronger when you work together. It also becomes professional as we have our own opinions," Arjun told reporters in a group interview.

"I am getting time to spend with him now because I am an actor. He is my father and I love him," added the 28-year-old who plays a kabaddi player in the film.

Arjun, who debuted with hit film "Ishaqzaade" and then featured in "Aurangzeb", says his father has learned a lot about him while working with him.

"For eight days I did it and we had fun. He didn't know that I carry my food all the time and he discovered that for the first time. He has never been on the sets to see me. I have seen his work for the last 20 years, but he has never seen me working," he said.

"Last day, I gave a shot and that's the first time when my father came and gave me a compliment. He said, 'good shot' and that meant a world to me. It means a lot to me. This is something that underlines or defines my existence. So, the equation will never change, it will only get better and better."

Arjun is Boney and his first wife Mona Kapoor's son. Mona died of cancer in 2012.

The young actor, who has moved out of the family home, says staying apart from his dad doesn't affect his relationship.

"In the relationship there has never been a drift. He was not living in front of me, so that's a change. But, the equation, love, and emotion never changed at any point. I respect his choice. I am happy as well as he is happy," said Arjun.

Boney is now married to actress Sridevi and they have two daughters.

Meanwhile, Arjun is gearing up for his third release "Gunday", which is coming out Friday.