View Profile
Guess who was recently caught by the fashion police for committing an unseasonal fashion blunder - the Rock On star and National Award winner Arjun Rampal. 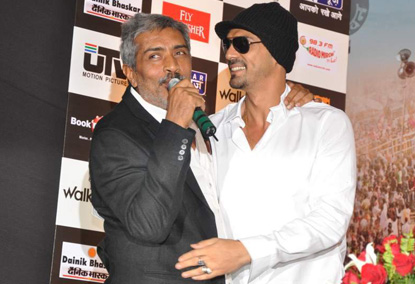 The blunder? He was seen sporting a snug-looking cap in the scorching Indian summer at a promotional press conference for Rajneeti.

The reason? Now that is something to speculate about. Apparently, Arjun has been kind enough to drop regular hints via micro blogging site Twitter in recent days.

One said, "Its official 1st day of shoot at RA. Trust me this one will shock the world." Another said, "I do have a completely different 'look' in Ra.One. But I can't reveal more because its all very confidential right now." ((c) Twitter)

A completely different look? We suspect that translates to a clean shaven-head, because beneath that un-summerish cap he wore, there was no sight of the gorgeous peeping locks!

Blame it on Ra.One 'cause he indicates as much! The SRK-Kareena starer saw some heat when Shah Rukh had to pick between close friends Ritesh Deshmukh and Arjun for what we suppose may be some villainous guy role in this superhero flick. Of course, Ritesh was hurt, but that is not our story here. The story is about Arjun's looks and locks. And if you've gotten over the shock of his baldness, there is more to be reported - a temporary neck tattoo! Apparently he's playing one of those ruffian 'look cool' goons and Arjun has indeed taken himself to new heights in donning the garb!

If the waist-long pony of the middle-aged character in Rock On was a surprise, imagine what a bald head, sans those lovely Rampal tresses will be like!

Apparently, Arjun does have something to say about his hairless patch - "Feeling light headed... no pun intended... thanks to director producer" ((c) Twitter)

Whatever can we say?! There's some looking forward to do before we get a glimpse of this movie's many wonders. Until then Arjun - here's wishing your lovely locks a speedy recovery!