View Profile
'Happy Birthdayyy!' that's exactly what the current heartthrob of Indian television; Arjun Bijlani must have heard all day yesterday!  Yes guys, this handsome hunk who is currently playing one of the leads of the famous youth show Miley Jab Hum Tum; turned 27 yesterday! So we thought of asking the birthday boy that how rocking his birthday turned out to be, but seems like Arjun was able to just have a sweet and simple birthday owing to his hectic working schedules! 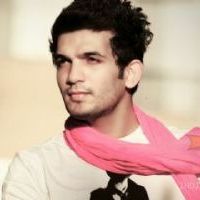 
Arjun stated, "Well, I was shooting all day! I tried to get an off but couldn't really manage to get one. So I spent most of my day on the sets of Miley Jab Hum Tum. But all of us on the sets have become like a big happy family now; I celebrated my birthday with them and they had also arranged for a cake to add up to the celebrations. Then post shooting, we had somewhat of a family get together at home and I spent some quality time with my family and relatives. Basically, it was a nice and simple birthday! (smiles)"

Well, this boy who has easily made a million hearts skip a beat thanks to his chocolate boy looks has definitely gained immense popularity as well as a huge fan following owing to his earlier character of Aalekh in Left Right Left and now portraying the character of Mayank in Miley Jab Hum Tum. So we wonder whether his fans were able to surprise him on the day of his birthday, "Well, one of my fans named Sangeeta actually came all the way to the sets with a cake to celebrate my birthday.  According to me, that was really sweet of her; I was genuinely shocked as I really didn't really expect it! It obviously makes one feel great! It is only thanks to all the love and adulation I have received from my fans; I get all the more motivated to give my best so that I don't let them down. I would really like to thank all my fans who have sent me such lovely messages and wishes on my birthday. It really means a lot!"

We also spoke to some of Arjun's co-stars whether they would like to give any message to Arjun, on this Arjun's on-screen partner Nupur a.k.a Rati Pandey said, "He is a great co-star to work with and also a great person by heart. All I would like to do is wish him all the luck and success for his future."

Another co-star-cum-friend Jas Karan Singh who plays the character of Uday said, "Arjun is a close friend and a great guy! The best thing I like about him is that he is a thorough professional where his work is concerned. I also wish him all the luck for his future and hope he reaches the heights of success, which I'm sure he will!"

We at India-Forums also hope that Arjun has a very successful year ahead and keeps on entertaining his fans in the same manner … Belated Happy Birthday Arjun!

Anwyzz Love all of uu=)

mayur80 13 years ago I read that u had a very simple birthday get togrther this year due to ur busy schedule. No worries Arjun u would be surely paid off for your hard work and would be blessed with more SUCCESS :-)