Ketki Dave can surely be termed as the 'Queen of Versatality'! - A serious theater artist to a comic television character, Ketki has done it all. However the actress cannot seem to get enough of the big screen. Enthusiastic to explore the different genres of Bollywood, Ketki is trying her best to knock on the doors of success in Bollywood too.

The Telly Buzz catches up with Kekti Dave on the sets of Kyunki Saas Bhi Kabhi Bahu Thi, where drama in the show has just begun to unfold. 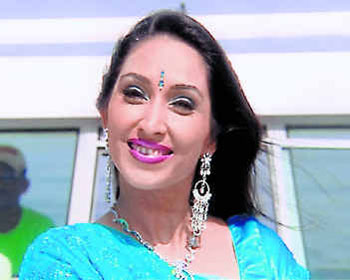 Featured Video
Talking about the much-publicised Chawl lifestyle of Viranis in Kyunki, Ketki says, "This will be a time where the grey shades of each and every character will be shown. I wonder how the audience is going to react, as it's the first time something like this is happening on the show. The actresses have left the fancy sarees and the fashionable bindis, and we all aren't even painted with that much make-up, thus giving us a very subtle look."

Over the years, Ketki has mastered many kind of roles in Indian entertainment. When asked Ketki, on what she loves doing the most, pat came the reply, "I love doing films. I believe I haven't done enough of films yet. I cannot wait to explore my options there. I have done serious drama in Gujarati Theater, and I was known for my comic side on the small screen. The only problem with television is that an actor gets stuck with the same kind of role for years. The audience might enjoy them, but the actor gets tired eventually. With films, one has a lot to offer. I agree that theater has given me a platform to experiment with different roles, but I have done enough of theater now, I want to concentrate on films."

On her upcoming projects, the A-ra-ra lady says, "I did one play last year, called - Ek chatur Naar. I might do a play this year as well. I have two films coming up in April, one with Vinay Pathak called 'Straight', and also 'Money Hai to Honey Hai' which is a Ganesh Acharya film."

14 years ago thanks so much...she is mean and nice but really funny in saas.....love the gujrati chachi dadi!!

14 years ago she was also in amdani atthani karcha rupaiya

14 years ago i luved her in yaaran naal baharaan!
she made a great pair with anupam kher and juhi bubbar :)

gud luck to her on her future projects.

14 years ago good luck to her in her films. hope to see more of in kyunki!

14 years ago thanks she looks so different.goodluck to her for her second spell in movies.