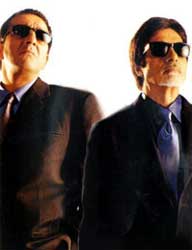 You can never have enough of Sanjay Dutt and Amitabh Bachchan together. Such powerful men, with such great build and acting prowess that makes every younster aspire to be them. We always need more of these two together. After successful duets in "Hum Kisise Kum Nahin", "Kaante", "Deewar", "Shootout at Lokhandwala" and "Eklavya", they will again be bringing down the house with their camaraderie and powerful performances in two upcoming films. One will be released soon... Sujoy Ghosh's Aladin. And another one is set to go on floors.

Apoorva Lakhia, the director of "Shootout at Lokhandwala" has announced a film similar to the "Shootout..." genre, this time based on the 1984 Khalistani Movement. This movement was about the Sikhs demand for a separate state like and , but this was not granted by the government. But the Sikhs kept fighting under the leadership of Jagjit Singh Chauhan, who later moved to and saw operations from there. Finally, to curb the anarchy, the then prime minister Indira Gandhi ordered the killing of the head of the extremist group in , Jarnail Singh Bhindranwale. Jarnail Singh was hidden in the in on the 3rd of June, when the Indian Army open fired at the temple to take down Jarnail Singh. Unfortunately this resulted in the loss of many innocent lives. This killing is famously known as Operation Bluestar. (Source: neverforget84.com) Apoorva 's subject of the film is this operation.

The movie will have Sanju bhai playing a real character KPS Gill, a super cop and Big B playing a sharp shooter. Both have played cop-characters several occasions in their film-careers. Let's see what will be new this time.

The subject of the film seems real intense. Waiting to see how well this movie turns out.