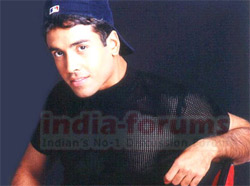 Tusshar Kapoor is all set to play a mute hairsylist in Shree Ashtavinayak's 'Golmaal Returns'. Now the actor needed to make his portrayal look as authentic as possible, and to ensure that he gets it right, he decided to study the work of his own stylist, Aalim.

Aalim is very excited about this. He says, " Tusshar has been keenly studying my craft for his new role and being such a great client of mine I'm flattered and very glad to help him in any which way I can!" Aalim adds that the actor has been studying his mannerisms – the way he holds the scissors, the way he plays with the hair, and even the tattoos he has.

Imitation is the best form of flattery, Tusshar. -(SAMPURN)