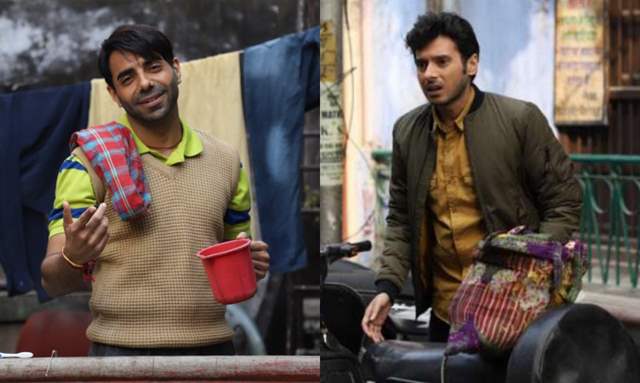 The talented duo, known best for their comic timings-Aparshakti Khurrana and Divyendu Sharma along with actor Harsh Mayar have teamed up for Hotstar Specials second exclusive movie titled ‘Kanpuriye’. A dramedy film comprising of three coming-of-age stories set in the bylanes of Kanpur. The film also stars  Vijay Raaz, Harshita Gaur, Rajshri Deshpande in pivotal roles. The film is helmed by T for Taj writer Ashish Aryan and bankrolled by Yoodley Films.

We got in a conversation with the leading cast of the film - Aparshakti, Harsh and Divyendu, who have spilled some interesting insights about their upcoming film Kanpuriya.

To start with, the actors tell us that Kanpuriya is a story of three people with parallel storylines. It’s not a buddy film, like the past Bollywood films, Dil Chahta Hai, Pyaar Ka Punchnnama, Chhichore, to name a few, which revolve around the basic concept of friendship.

Further talking about the story behind the film, and the characters that the actors play, Aparshakti reveals that the similar aspect in all the three parallel stories is the father-son relationship, but at the same time it is also the differentiating factor as the approach of a father in each of the actor’s story in the film differs from one another.

The film’s director Ashish is from Kanpur, and on being asked if that helped the actors to prepare for the film, Aparshakti states that “It definitely brings a certain amount of conviction and authenticity that comes to the relation of an actor-director, when the filmmaker is from the same city.”

He adds that Ashish took them around and in fact also showed them the place where he met his girlfriend for the first time. Besides, he also helped them with the Kanpuri essence and accent, Aparshakti adds.

Adding to the same, Divyendu states that the director had written the script with such care and detail, that it instantly attracted him towards the film and inspired him to take up the project.

After watching Divyendu in his famous character ‘Liquid’ from PKPN, and next in Mirzapur in a  completely different avatar, talking of his character in this upcoming film, the actor reveals that this unique genre of the film ‘tramedy’ is a drama for them, but a comedy for the audience. He says, “The situations showcased in the film will make you laugh but also make you feel bad for the character on screen. And, that’s the beauty of the story.”

Besides, Harsh states that is very fond of Vijay Raaz, who also is a part of the movie. He went on to shower words of praises for the veteran actor, and his other co-stars Aparshakti and Divyendu added that “Vijay sir is a gem of a person, full of quirkiness, just like the city Kanpur and the film. There are certain films that automatically attract him.”

Amidst the fun camaraderie the actors share, director Ashish jokingly revealed that Divyendu taught everyone on set how to make tea.

Overall, the film Kanpuriya sounds quirky and fun and releases on 25 October on Hotstar Special.

FINALLY! Mirzapur 2 Gets A Release Date