'For 'Gulel', I really want Abhishek and I know Abhishek wants to do the role. He has said yes,' Sen told IANS.

'In fact, earlier on he had even allotted dates when the late Ismail Merchant's nephew Naeem wanted to produce it. Abhishek told Naeem that if Aparna Sen is doing 'Gulel', he'd do it. Then Ismail died and the project fell apart. But I'm ready to make 'Gulel' with Abhishek as soon as he gives the dates,' she added.

She is in the process of completing her latest Bengali film 'The Japanese Wife', which is based on Kunal Basu's short story and stars Rahul Bose and Raima Sen. The film is about a man involved in a relationship with two women simultaneously.

If Sen is keen about Abhishek, the actor says he has an affinity towards Bengal and Bengalis.

'At the moment, there're lots of films under consideration. 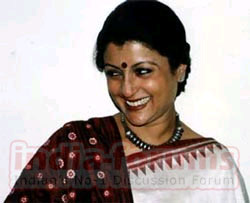 I'm on the verge of completing 'Laaga Chunari Mein Daag'. That was great fun.

'I've known the director Pradeep Sarkar from before. We've done a couple of ads before. It was a very sweet unit. Before I joined them, they had already started the shooting. But I immediately felt at home. And, yes, there were lots of Bengalis, including my mom, the director and Rani, who's a good friend, on the sets.'

Abhishek, who worked with another Bengali director, Rituparno Ghosh, in 'Antarmahal', says he loves working with Bengalis.

'I've worked in two Bengali films with Rituda in 'Antarmahal' and in a film called 'Desh', directed by Raja Sen in which I played my own mom's son. It would be delightful to work with Aparna Sen.'