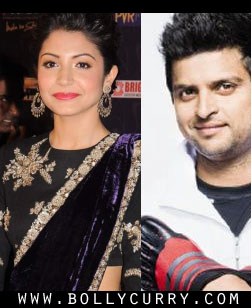 Adding to the list of the ever-growing love, err, friendship affairs between Bollywood divas and cricketing superstar is cricnation's chocolate boy, Suresh Raina, and Bollywood's Band Baaja Baraat girl, Anushka Sharma.
According to a leading tabloid, the two first met in London during the team's tour of England and ever since, the duo have been 'chilling out' together, more often than needed! Sources close to the pair claim the two share a good rapport, but none of them - as of yet - have readied themselves to divulge any further details.
However, Anushka's spokesperson has gone on record to deny of any link-up between the two, stating that the actress is totally oblivious to the news, so far so that she has no idea who the cricketer is even supposed to be.
Unknown to many, Raina was not too long ago linked with a popular Union Minister's daughter whilst the whole filmdom believed Anushka to be settled down with her two times co-star, Ranveer Singh.
Giving time to talk, we'll see if the 'just good friends' tag changes into a relationship status soon or not!

Amanda Seyfried Announces The Birth of Second Baby
42 minutes ago

NCB Dismisses Rhea's Claim of 'No Jurisdiction in Drugs ...
43 minutes ago