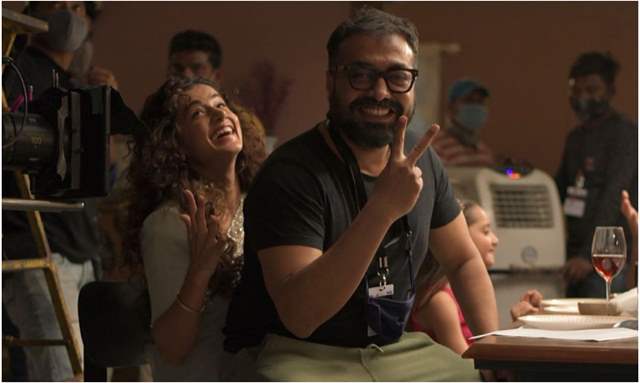 Recently, Bollywood actor Taapsee Pannu, film director Anurag Kashyap, and a few more celebrities' residences were searched by the Income Tax department in connection to the alleged tax evasion case. While Taapsee has finally broken her silence over the alleged tax, director Anurag Kashyap also spoke up about the same with an uber-cool reply to all his haters who wanted officials to get the best of him.

Taking to his social media handles, Kashyap hit back by sharing an update about his upcoming film - ‘Dobaaraa’ starring Taapsee, and informed that they are back on the sets. Announcing the start of his film’s shoot, the AK vs AK actor shared a picture of him and Taapsee from the sets. “And we restart #DoBaaraa .. with all our love to all the haters .. ???” read Anurag Kashyap’s caption.

On the other hand, Taapsee’s tweet read, “3 days of intense search of 3 things primarily 1. The keys of the “alleged” bungalow that I apparently own in Paris. Because summer holidays are around the corner. 2. The “alleged” receipt worth 5 crores to frame n keep for future pitching coz I’ve been refused that money before 3. My memory of 2013 raid that happened with me according to our honorable finance minister P.S- “not so sasti” anymore.”