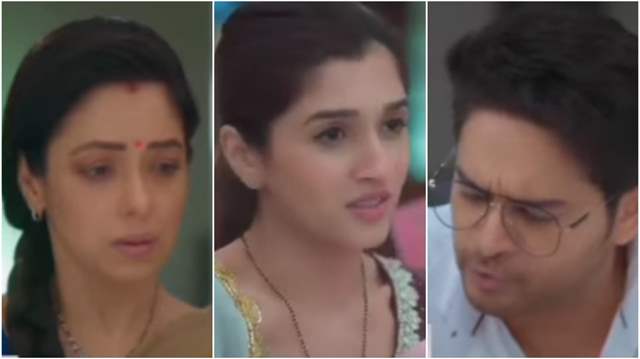 Star Plus show ‘Anupamaa’ is riding high on success. The current track of the show revolves around Paritosh getting exposed in front of the family. Vanraj has thrown Toshu out of the house and the family is trying to support Kinjal so that she can come out of the shock. Anupamaa is torn between her responsibilities towards Anuj and Kinjal.

In the upcoming episodes, Anu and Anuj share a conversation. He tells Anu that he is proud of her and that she chose the difficult part of punishing her own son and supporting her daughter-in-law. Anupamaa breaks down and share her thoughts on being pressurized to perform duties for both the houses. Anuj admires Anupamaa’s way of managing things.

Kinjal wakes up and the family try to cheer her up. She states that she wants special tea made by Anu. Kavya informs her that Anu left the house since she had to go choti Anu’s school. Leela tells her that she would call Anu but Kinjal asks her to not disturb Anupamaa. Kavya leaves for work and asks Vanraj and others to take care of Kinjal. Leela frowns. Kinjal steps out of the room and decides to leave the house leaving everyone shocked.

At Kapadiya mansion, Barkha and Ankush manipulate Anuj and Anu. Anuj tells Anu to not get used by people who take her for granted. Rakhi arrives at Shah house and is shocked to know that Kinjal has decided to leave the house. Kinjal asks Rakhi to drop her at Anu’s house. The family gets shocked. Furthermore, Vanraj gets Kinjal at Anu’s house. Anu asks Kinjal to stay at the house until she feels better.