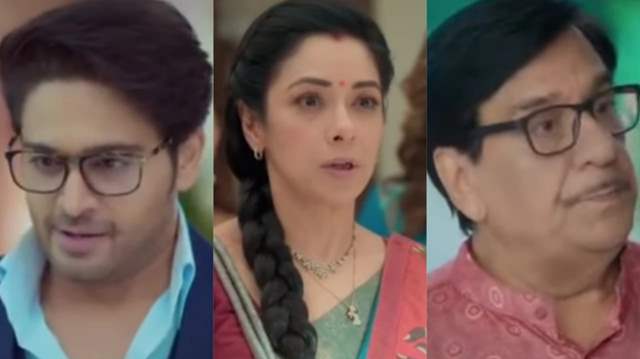 Star Plus show ‘Anupamaa’ has kept the fans hooked to the television screens. The current track of the show revolves around Anu facing humiliation at Shah house and Baa has asked her to leave the house and never return. This has made Anu extremely upset, however, she has now taken a stand to leave the house and never come back. Pakhi and Toshu humiliated Anu a lot while Vanraj didn’t ask them to shut up and indirectly enjoyed Anupamaa being insulted.

In the upcoming episodes, Anu bids an adieu to the family members. Kinjal gets extremely restless with the thought of Anupamaa not returning to the house again. She also understands Kavya’s feelings of wanting to become a mother. Kavya gets emotional thinking that it is only Anu who could understand her emotions. Anu meets Kinjal and asks her to take care of the house.

Anu lights a diya at the house temple and talks to Vanraj. She tells him that he is responsible for the major rift that was created between a mother and her daughter while he could control the same. She says that she’s leaving but nobody knows God’s plan and may be she will be back in the house.

Anuj talks to Bapuji and tells him that he never took a stand for Anupamaa whenever the family members attacked her. Bapuji agrees to the same and states that he needs to be punished for the same and her daughter not visiting him will be his biggest punishment.

Furthermore, Bapuji shows mirror to Pakhi, Toshu and Vanraj and tries to make them realise about their actions while Anu gets emotional in the car.