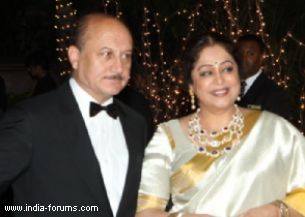 Real life couple Anupam Kher and Kirron Kher have been cast as a couple in romantic comedy "Total Siyapaa". The film's writer Neeraj Pandey says it was a concious effort to bring them together on screen.

"I think they were the right choice for the film and the characters that they play are also husband and wife, which they have never done together. It was important and nice to have them," Pandey told reporters here during the movie's trailer launch here Monday.

The film is directed by E. Niwas.

Asked why he didn't direct the film himself, Pandey said: "We found a better director for this subject, which is the reason we summoned upon E. Niwas. He had delivered exactly what we wanted."

Pandey is known for films like "A Wednesday" and "Special 26".