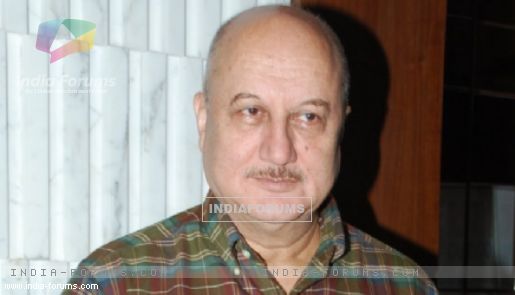 On his landmark 60th birthday on Saturday, veteran actor Anupam Kher will open his new play "Mera Woh Matlab Nahi Tha", and says it is work that keeps him feeling as "young" as 16.

"Birthdays are meant for special occasions. I am opening my new play #MeraWohMatlabNahiTha today. Work makes one feel younger & happening," Anupam shared with his friends and fans on Twitter on his special day.

The play, written and directed by Rakesh Bedi, also marks the return of actress Neena Gupta to theatre.

In a career spanning over three decades, Anupam, has been a part of iconic Hindi films like "Saaransh", wherein he played the role of an elderly man who loses his son and struggles to collect his ashes to great acclaim, while he was just in his 20S.

An alumnus of National School of Drama, Anupam has featured films like "Karma", "Hum", "Ram Lakhan", "Lamhe", "Dilwale Dulhania Le Jayenge", "Kuch Kuch Hota Hai", "Maine Gandhi Ko Nahin Mara" and "A Wednesday" among several others -- giving the audience a glimpse of his ability to slip into intense as well as comedic roles with ease.

Apart from films, the actor has done his fair share of work on the small screen. On the international turf, he has done projects like "Bend It Like Beckham", "Bride And Prejudice", "Conquest, Lust?", "You Will Meet A Tall Dark Stranger" and "Silver Linings Playbook"; and he keeps his love for theatre going with his own play "Kuchh Bhi Ho Sakta Hai".

At 60, he received the most special compliment from his doting mother.

"I take my mother's statements very seriously especially the one she made today on my birthday. She said, 'For me you'll always be 16'," tweeted Anupam, who is married to actress Kirron Kher.

On Twitter, he received several birthday wishes from the film fraternity as well as his fans.

Thanking them, he wrote: "On my landmark birthday today just want to say that God & Life has been kind to me. Your wishes are my vitamins. Thank you for loving me."

Here's what the celebrities had say on their master actor's special day:

Punit Malhotra: @AnupamPkher Happy Birthday sir. Hope u have yet another spectacular year and continue to surprise us:)Love and regards

Madhur Bhandarkar: @AnupamPkher My heartiest wishes to you on your Birthday. Have a successful year filled with success and glory. Jai Mata Di.