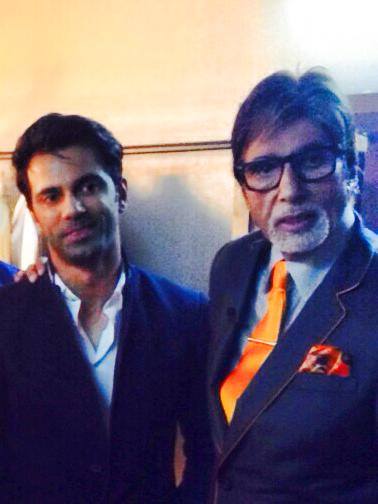 Bollywood celebrities coming on television shows and famous reality shows to promote their upcoming movies is the new trend that the audience is been witnessing for some time now.

Besides this, there has also been some occasions where television actors too come to promote their shows on reality shows for their respective channels.

This time who took this trend further is Anuj Sachdeva who will be seen in Rajan Shahi's Itti Si Khushi. Anuj had recently been on the sets of Kaun Banega Crorepati 8 on Sony TV to promote his upcoming show on the channel. We got in touch with Anuj to know more about his experience meeting the legendary Mr. Bachchan.

Anuj says, "Yes, I had been on the sets of Kaun Banega Crorepati 8 to promote my upcoming show Itti Si Khushi which will go on air from September 29. My experience with Mr. Bachchan was fabulous. He is a strong person with a strong personality. You automatically can feel his presence. He is been working since so many years and he is just so perfect. I have been seeing his work since so many years now and also in that one year episode that I was with him, he never fumbled a single time. He just perfectly knows what and how to speak with whom. People do not call him a star or a legend just like that. He has actually worked hard on it for the kind of respect that he is getting over the years. Also, more than screen presence, it is more about how are you off screen and your spontaneity to react on every situation. He specially came to my make up room to meet me and also hugged me. Truly a humble person he is. Before coming on the sets for shoot, he knows every single thing of that person; well in my case, he knew everything about our show. I am on cloud nine."

Well Anuj, not everyone is that fortunate to get an opportunity to meet the legend himself. Must say, you are a lucky man!

sujairohit 6 years ago Excited to watch both Anuj and Smiriti in KBC on thursday 25th Sept.As even Smiriti is also participating with him.
Very excited to watch Itti Si khushi as promos are all very good.

BinKuchKahe. 6 years ago Looking fwd to Itti Si Khushi :)
I wish Smriti came with him

Budtameez 9 years ago It's true that people will want to watch more than 1 movie during Diwali festival but only 'Good' ones!

-Preeti- 9 years ago Isnt this Story similar to Dil Aashna Hai. There she tries finding her mother and here itsfather:|
Anyways wishing them Good Luck