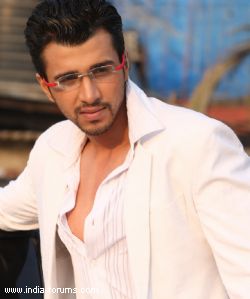 It was a report on Tellybuzz about Ankit Kakkar quitting two famous shows namely Star Plus' Navya and Imagine TV's Chandragupta Maurya to explore more opportunities in the industry and it seems the guy has found something better.

The latest we hear is that Ankit Kakkar has bagged Yash Raj Production's next film titled Ishqzaade, starring Arjun Kapoor and Parineeti Chopra.

Ankit Kakkar would essay the role of Arjun's brother and would belong to same family but would have a grey shade.

We contacted Ankit Kakkar who states, "I don't how much I can divulge about my character and movie but I can say, it was great working with YRF's team and had a fantastic experience. Though it was not for the first time I am working with Yash Raj but it is surely my first big project with YRF."

The movie is slotted to release on 18th of May. When asked Ankit about returning to TV he says, "Well, if I get good roles in small screen I would definitely wish to return or else I would stick to Bollywood."

Tellybuzz wishes Ankit for his B town ride!

Parmasone 8 years ago u were great as Gautam in Navya. gud luck wth new wrk

sifarah 8 years ago Ankit did a great job in Portraying as Goutam in Navya... All the very Best Ankit in Bollywood

navyaaddict3 8 years ago All the best for your new film project Ankit.

zara990 8 years ago He did a great job in Navya as Gautam.All the best for his new project

anyacrazy 8 years ago navya rocks..one of the best shows on sp!!!!

sanazanu 8 years ago Navya is the best show ever ...i watch star plus only for Navya...m a big Anya fan

priya_anya1 8 years ago Oh thats gr8
all the best n all our navya fans blessings will be there for each n every artist in navya show ...god bless u
navya rockzz
navya fans rockszzz

Sara Ali Khan heads to Mumbai as she receives summon from ...
26 minutes ago

Bigg Boss 14: First look of the shopping mall, theatre and ...
35 minutes ago

exclusive
Exclusive Ashnoor Kaur on music video with Millind: It is something ...
56 minutes ago