Sunaina Gulia aka Dr. Anjali plays the over zealous,ambitious doctor and sometimes selfish sister in Dill Mill Gayye. In conversation with our reporter Ranjini Nair, Sunaina tells us more about her character change in the serial. 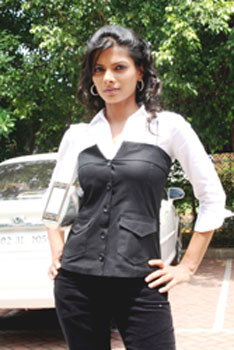 Featured Video
How does it feel being a part of a show which has such good TRP's and so popular with the audience?

It feels great being a part of Dill Mill Gayye. It is great fun working with the cast and crew. They are all fun loving people and I feel really lucky to be a part of this serial.

Do you think the track of the serial, originally a hospital background, has now shifted to a love story?

Not at all. The title itself suggests that it is a love story. Every serial starts off with some or the other background and ours started off with the hospital as its background. But the story doesn’t only revolve around the love interest of the doctors but their lives too, what they do, how they handle the responsibilities and pressure at the hospital.

Anjali has gone through a major character change; Will she continue being a good sister and a friend, or is the change temporary?

Yes Anjali has undergone a character change and it is permanent. Anjali was never the bad girl (laughs), she was a just a bit selfish, but always good at heart. She helps her sister a lot and is always there for her.

What’s more in store for Anjali ? Whom will she go with? Armaan or Atul?

Actually I am not aware of the future track myself. I have no idea with whom Anjali ends up either, so I cannot say anything right now. As for me, I would like to go with everyone (laughs).

And whom do you share a good on- screen chemistry with?

Since all of us are from the same age group, we have a great rapport with one another. We hang out, have lunch and have a blast together. I have a great on-screen chemistry with all my co-stars.

Do you think television actors are more popular compared to film stars?

To a certain extent television actors are more popular with the audience. But I don’t think we can compete with the popularity of some of the big stars like Shahrukh Khan. Everyone dreams to be just like them.

What about your projects before Dill Mill Gaye?

Before Dill Mill Gaye, I did Kuch Love Kuch Masti and Ada on Sahara and Kabhi Haa Kabhi Naa on ZEE. I played the main protagonist in all these serials. After that, I did Travel shows for 2 years and now DMG.

What are your plans for the future? Any new projects

Right now, I have no time for any new projects. Apart from Dill Mill Gaye I am hosting a travel show on VOJGEN channel and all my time is consumed shooting for these two shows.

One role that you would give an eye and limb to play?

I would love to try out different roles portraying different shades. But the one role I’ve always dreamt of doing is the role of Scarlett O’Hara in Gone with the Wind.

14 years ago stop butturing srk kareena. we all know u r out of work.

14 years ago evry1 wants to work with SRK....right from deepika to madhuri....all r mad behind him...;)...i used to like kareena but after her and shahid's break-up and saif and her's link up i'm no more that fond of her

+ 2
14 years ago wow..soo cool;)lol guys why can't she do a love story with srk?...evry one want SRk but everyone is not special like kareena.)

14 years ago Thats so cool. Everyone wants to do a love scene w/ ShahRukhl.