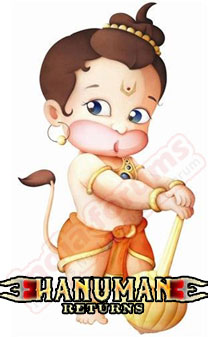 The feature film is a sequel to India's first 2D animated movie 'Hanuman'. The 90-minute film is a co-production between Toonz Animation and Percept Picture Co (PPC).

The movie has been released in 370 theatres across the country. The current Hindi version will soon be dubbed in several other Indian languages.

The movie has been scripted and directed by Anurag Kashyap.

The story is about the rebirth of Hanuman as young 'Maruti', on whose shoulders lies the fate of humankind. The plot has been conceived keeping the contemporary world in mind.

'We felt that Indian mythology has lots of values to deliver in today's world and we need to teach our younger generation the importance of our traditions,' said P. Jayakumar, CEO, Toonz Animation.

Toonz and PPC will also join hands to produce 'Hanuman 3', which will be a 3D feature film.

Toonz, a major provider of animation to the top US and European producers, is part of the international business conglomerate, Comcraft Group, which is based in Geneva.

The Animation Magazine has heralded the company as one of the top-ten multimedia studios in the world.

The sprawling, 18,000 sq ft state-of-the-art studio is located in the Technopark campus here where 500 artists work with creative professionals from across the world, including the Philippines, Singapore, Canada, the US and elsewhere in India.