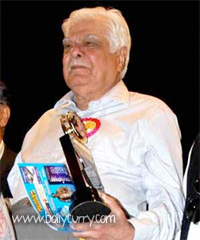 Kapoor, died Saturday of cardiac arrest. He was 84.

'I'm at Surinderji's house right now. He had gone for a walk in the evening. He came back, drank a glass of water and while he was untying the laces of his shoes, he suffered a heart attack and died on the spot,' Anees Bazmee, the director of Kapoor's production venture 'No Entry', told IANS.

Kapoor, who is survived by his wife, three sons Boney, Anil, Sanjay and daughter Reena, was the producer of films like 'Hum Paanch', 'Woh Saat Din', 'Loafer', 'Judaai' and 'Hamara Dil Aapke Paas Hai' among others.

Kapoor was the president of the Film and Television Producers Guild of India from 1995 to 2001 and was also felicitated with the L.V. Prasad Phalke Award in 2009.

“I miss her and I can't even tell her”, Arjun Kapoor’s emotional video ...