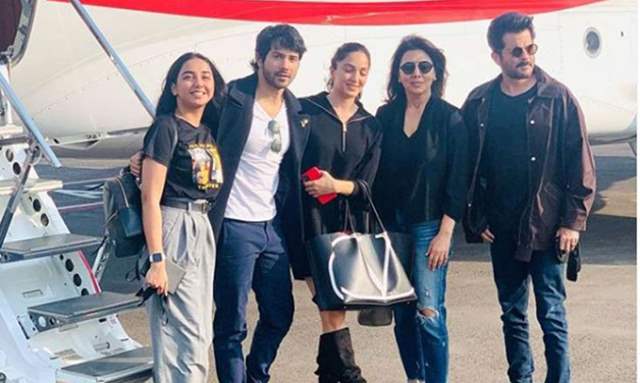 Recently, actor Varun Dhawan, Neetu Kapoor, and filmmaker Raj Mehta were tested positive for coronavirus while they were shooting for their upcoming film ‘Jug Jugg Jeeyo’. Soon the shoot came to a standstill and the actors returned back to their homes respectively. While Kiara Advani, Anil Kapoor was tested negative for Covid-19 they returned to Mumbai.

Now, a recent Mid-Day report suggested that while the trio is recovering from the recent setback, other actors like Anil and Kiara will be resuming the shoot.

The combination dates of actors again were becoming difficult; so, Anil, Kiara, and Prajakta Koli are likely to begin filming their portions by later this week, reported Mid-Day.

The report added that the team of assistant directors, under the able guidance of producer Shashank Khaitan, is eyeing to kick off the shoot by December 17.

Furthermore, Maniesh Paul, who had tested positive on returning to Mumbai, has some scenes remaining.

Varun, Neetu and Raj are recovering and once they are given the clean chit by their doctors, they will be resuming work.

On the work front, ‘Jug Jugg Jeeyo’ marks the return of Neetu Kapoor on the sets after seven years. The actress was last seen in ‘Besharam’ which also featured her late husband Rishi Kapoor and son Ranbir Kapoor.

Meanwhile, Varun Dhawan and Kiara Advani were supposed to star in Shashank Khaitan's ‘Mr Lele’, however, the film was eventually shelved. She also in Kalank’s song sequence - ‘First Class’ with Varun.

B-Townies promising an entertaining 2021; List of Most awaited films ...