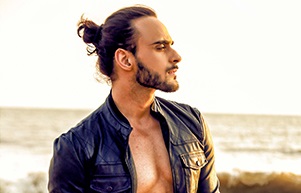 Sapna Babul Ka Bidaai fame Alekh AKA Angad Hasija is back after his last stint on television in Amrit Manthan with Dilli Wali Thakur Gurls in & TV.

Our source informs, "Angad Hasija has been finalized to play a pivotal role opposite Chandi (Monica Sharma) He will be shown as a rich man named Rajveer Singh. Angad will start shooting for Dilli Wali Thakur Gurls in 2-3 days."

An elated Angad says, "Luckily till now I have been portraying various different roles on television and this was one character that I found interesting and different from what I have done in the past. I will be seen as a Punjabi guy who is lively and very energetic. Infact my real side will be seen through this role - be it my Punjabi accent or language.  The audience will get to see the real me as  a Punjabi Munda in the show."

We wish Angad good luck for his new project!

5 years ago Thats great. Dilli wali thakur girls is an awesome show. Sukriti and Aamir u rock as debjani and dylan in the show.

emmskay 8 years ago Sallu tou sallu hai naa... its the heart of gold i love nothing else matters. Love you sallu &lt;3