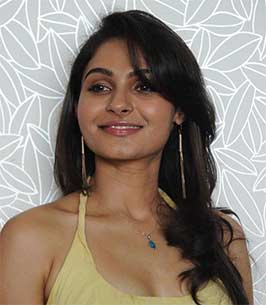 Singer-actress Andrea Jeremiah, who works predominantly in the Tamil, Telugu and Malayalam film industries, has for the first time composed a single, titled "Soul of Taramani", for upcoming Tamil romantic-drama "Taramani".

The track will be released here Sunday by actor-filmmaker Kamal Haasan.

"I had no idea she can compose songs as well. I know she's an actor as well as a singer, but when I listened to her compositions, I was pleasantly surprised. I really liked one of her tunes and felt that it would be apt for my story," the film's director Ram Subramaniam told IANS.

Andrea is also playing the lead in "Taramani".

"Andrea asked me to use the song. We decided to use it as the song to promote our film 'Taramani', hence we called it 'Soul of Taramani'," he added.

Andrea, who started her career as a playback singer, made her cinematic debut with 2005 Tamil romantic-drama "Kanda Naal Mudhal". Since then, she has starred in films such as "Aayirathil Oruvan", "Mankatha", "Annayum Rasoolum" and "Vishwaroopam".

As a singer, she is known for chartbusters such as "Kannum kannum nokia", "we have a Romeo", "yeno yeno" and "who's the hero".

Before Death, SP Balasubrahmanyam Has Sung For Upcoming ...
30 minutes ago

Sushant's Family Displeased With Attention Being Diverted ...
32 minutes ago

After Ten Months Jacqueline Fernandez has Finally Re-united ...
42 minutes ago