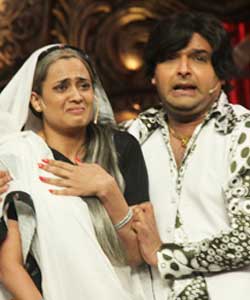 Kapil Sharma and Shweta Tiwari have done it again and have proved that they are the best Jodi ever in the Comedy genre. The unbeatable Jodi has won Sony TV's Comedy Circus - Ka Naya Daur for the second time.

A source says,"Kapil and Shweta have won this season of Comedy Circus. Krushna Abhishek and Sudesh gave them a tough competition and have finished a close second."

"The theme was around the show Comedy Circus itself. Shweta and Kapil showcased a fantastic performance wherein Shweta enacted the role of Roshni Chopra, the anchor of the show and Kapil, the makeup artiste. Krushna and Sudesh presented themselves as the Comedy Circus Band", adds the source.

We tried contacting Kapil Sharma, but he was unavailable for comment.

Marz_Mahira_fan 8 years ago Congratzz Shweta...!!!
Yayyy my sweetheart won comedy circus... :-) :-)
Shweta you were simply superb...!!! Love you a lott...You just rock with ur flawless acting in Parvarish and Comedy Circus...!!! I m so proud to be ur fan...But now i will miss watching you in Comedy Circus as it is abt to end... :-( :-(
Plzzz come in another season of CC as well coz its simply a treat to watch you doing comedy...!!! This time with Krishna ... :-D

i like krushna and sudhesh too.. they are awesome..!

congrats to both the jodis :D

gohem123 8 years ago Congrats to Kapil and Shweta..I know kapil must be bored to get the title always...Kapil ,you are a talented amn..Please don't back for next season.You can work in serial or films. You are a good singer too...
All the best for you

AASUS 8 years ago Congratz to the winners and wish both all the best!

smallwonder 8 years ago Comedy Circus is a show tht spreads so much happiness... You never get bored of these people no matter how many seasons they come back for... Truly love this show... :)

-Jahnvi- 8 years ago What's the point? They declare winners and come back with the same contestants over n over n over again. Getting too repetitive now, don't you think? Happy for the jodi but seriously, can they please not bring back Krushna, Sudesh, Kapil, Rajeev, Bharti etc. in the next season? I am sure there's more talent out there. All these people have proved their skills already so give others a chance too. Grr..

akash08 8 years ago I want to know one thing.. what do one get out of winning comedy circus? it again starts.. and the cycle goes on.. is there any award money for winniing this?

ISano 8 years ago i knew it.. we dont even have to see the final..
its always so clear