This weekend surely was one of the most electrifying musical weekends!! Be it for absolutely outstanding performances in either shows or the nerve wrecking tension faced by the viewers, frustration or exhilarated jubilations or the controversies surrounding Amit Paul's return, the week was definitely an emotional rollercoaster ride! While some cheered, some were left in despair. But musically, it was a gratifying week!

SVOI Chhote Ustaad ruled this week’s musical time. The two talented girls – Aishwarya and Anvesha, gave one brilliant performance after another and clean bowled the crowd. If Aishwarya had touched the heart of the Kolkata crowd with a beautiful rendition of a Bengali song, this week it was Anvesha’s turn, who sang a flawless Gujarati song and endeared the crowd of Ahmedabad! 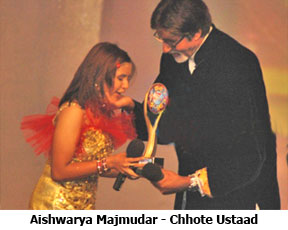 Featured Video
The Grand Finale on Saturday was a grand affair, celebrity studded and the jewel in the crown was Amitabh Bachchan. There were some outstanding performances by the two finalists, and the other performers. Some of the performances of the two A’s really stood out. The retro dedication was beautiful but some of the new popular numbers was not as pleasing. The show stealer of the day definitely was Anvesha with her “Ami je tomar rendition”. The show though grand, had a few flaws as well. The two hosts – Abhaas and Shaan, went overboard many a times with their exaggerated expressions. The editing team did not match up to the occasion resulting in eye catching faux pas especially in the beginning when Abhaas announced for the AV to show the reaction of the other Chhote Ustaads and Shaan agreed that it was indeed confusing hearing them, but the fact is that AV was never shown! The end was abrupt, the anchors forgot to mention about the awards won or even the votes count. Repeated use of “Aath dus ka difference”, that figure of speech was indeed mistimed and it caused more controversy than consolation. 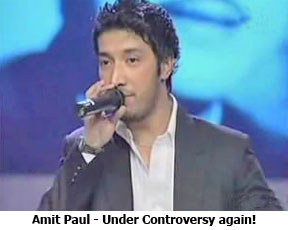 In K for Kishore, this week the theme was “Dard Se Disco Tak”, a tough challenge set to judge the versatility of the top 5 and they all gave some brilliant performances. The new introduction style of the participants with their own composition was indeed entertaining. The performance by Amit Kumar and Sudesh Bhosle was also very entertaining. This week the show format has changed again. Does the show have a fixed format at all or does it evolve as things progress? Handling the mike by the contestant gives an impression that maybe the songs are prerecorded and what we see on stage is only lip-sync. Amit Paul has been shrouded in controversy from the time he set foot and the episode ended again on a suspense – whether Amit Paul should be allowed to be a part of the contest or not. This time Amit Kumar and Sudesh Bhosle’s comments hold some weight. How many times should a participant be given a chance? Is that not unfair to those who are also unwell and yet have to face the challenge?

SVOI show had many technical and TRP related shortcomings, but it has definitely produced two very talented singers who have walked away with the Winner and the first runner up titles of Chhote Ustaad. On the whole, a very happening musical week – the winner this week was definitely music.

14 years ago @ Baskar T
The Kfk show was recorded well before his overseas shows ,Amit got sick during the Kfk shoot & hence couldnt perform,later when he got well he did his overseas concerts.He didnt lie.

@advil
This is from Amit's cousin,HE WAS FORCIBLY TOLD TO SING IN K FOR KISHORE JUST 30 MINS PRIOR TO THE SHOW..IN SUCH A LESS TIME, AMIT HAD TO PREPARE HIS SONG AND SING..HE WAS NOT EVEN FULLY RECOVERED FROM HIS BAD THROAT....

I agree that Amit shouldnt continue bcoz its unfair to the other participants,but Sony wants to drag the issue for TRP.I know it seems that Amit is bending rules & given special preference but thats not true.
He has been scolded for no fault of his,unfortunalty he is being targeted for publicity gimmick by Sony.
Even with 30 mins prior preparation I thought he sounded very good.

14 years ago The show stealer of the day definitely was Anvesha with her “Ami je tomar rendition”.

No doubt Anwesah is a gem destined to produce many more show stealers in the times to come!

14 years ago I am a AMIT fan..lekin i dont feel amit would have enter in the show again...Let see what they have to decided this week

14 years ago Guys & girls i don't think the judges of KFK are that foolish to give so many chances to Amit...
I'm sure they are just doing all this natak for trp's of the show to go up...I don't think ya'll should be that harsh on the guy.

This is just my opinion....

Amit was the weakest singer this week. This will be the third time that he was given a chance. Too unfair on other contestants who has been working hard day after day.

Moreover the fellow is doing overseas shows so why create such stories. Why not tell the truth and bow out.

+ 3
14 years ago I still dont get why Bappida got mad at Arnab when he himself had said that in one fo the songs his low notes didn't hot properly. Bappida's reaction was indeed funny.


Amit Paul- singing wise that day he sang with a suppressed voice and did not do justice to either of the two songs.Its really very strange that when it came to international crowd and live shows he performed welll, but when back at home and especially when it is KFK time his voice goes all funny. He should have simply bowed out citing earlier commitents as a reason instead of creating these dramas and then losing face. I agree to Amit Kumar or Sudesh Bhosle's logic that everytime he cannot be given special treatment that too when things are in the top 5. There were atleast 3 others there with bad throats and yet they faced the show. He should himself bow out.

SVOI was great .The two girls and the rest were fantastic.Anvesha with her Ami je tomar number was as usual mindblowing. Abhaas and Shaan was super hyper - Abhaas comapared A & A to Karan and Arjun of Mahabharath- ha ha.Editing was really bad and worse is thes etwo hosts forgot to mention in the end what the winner and runners up got.

I did not like Ash's choice of songs in the last face off in front of Big B. She should have also sang some of her best ones instead of all these new ones.Its not that she did not sing well, but the choices were not that great.While Anvesha's Ami je tomar was fabulous, I did not like her Khallas song as much- the punch was lacking.

Yes in the end it was music which won this week.

+ 3
14 years ago I seriously need a ROFL here after reading Bhaijaan your post!!!!

Tellybuzz please we have a petition. Do give us emoticons here. =)) =))

But true definitely this week it was MUSIC that won!!!!

+ 5
14 years ago I disagree with the Chote ustaad column..i mean not wel balanced written...
Its giving more footage to abhaas then Big B. lol...

If Bhootnath flops or Aiswarita rai's career flops then i will blame Telly buzz team =))coz they have not mentioned why Big B came(to promote Bahu and Bhootnath)...

Meri bahu Aishwariya is missing...that raised many controversy too,coz people felt Aishwarya's name is being promoted too much...

No wonders if Big B starts planning to direct and produce a film title Meri Bahu Aishwariya
Then salman will direct a film Meri mehbooba, Shahenshah ki Bahu

K for kishore should be called now as
CFE for Change format Experience...

Note: The views expressed are solely from Me, If any one is upset or hurt they can take mood swing tablet on there own risk..