SaReGaMaPa L'il Champs 2007 finally ended their second successful season with a Grand show. Lil Champ's contest has found its Champ and the winner of this season’s of SaReGaMaPa International L'il Champ is none other than Anamika Chaudhury, contestant from Mariani Assam. Rohanpreet is the first runner-up, while Tanmay came third. 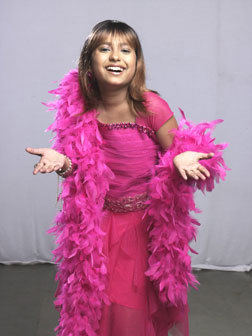 Featured Video
The Grand Finale was made extra special with lot of grandiose and great performances and dazzling stars from musical and tellyworld. Lot of legendary figures from the Bollywood Music fraternity like Anand Bakshi, Pinaaz Massani, made it to the show. Past SaReGaMaPa show contestants, Debojit, Sumedha, Aishwarya, Mauli Dave and many others were also there as special guests. Both the Guru’s Sonu Nigam and Suresh Wadekarji came up with some brilliant performances along with the mind-blowing numbers from all the top ten contestants.
The stage was set alive with memorable performances by Smriti Irani, Rajshree Thakur and Divyanka Tripathy. Amir Hafeez's absence was conspicuous. Aditya made sure to give some awesome performance and take everyone’s breath away. Even the three finalists of L'il Champ 2006 were there to welcome the new L'il Champs of SaReGaMaPa and gave some fabulous performances.

Ajay Devgan and Kajol werethe special celebrity guests. The couple also declared the International votes where it was Rohanpreet who got the highest. India votes showed Anamika to be leading in almost all the zones.

Anamika walks home with a huge amount of Rs. 20 lakhs in cash prize and a Hyundai car. She was thrilled to accept the award from CEO, Zee Entertainment Ltd, Pradeep Guha.

With this, Zee completes yet another successful series. A big applause for Anamika and both the runners-up, Rohanpreet and Tanmay Chaturvedi!!

14 years ago i already knew the order i feel this show is more about where you're from mostly...but she was the most talented from Rohanpreet and Tanmay.....

DulhanLover 14 years ago why do always a girl winn lil champs and a boy win chalange?

14 years ago I was so glad she won, and I could see so much nervousness on her face, before the 1st runner up results. She danced so well, and of course her singing was fabulous.

14 years ago Congrats to all three of them, they were all excellent! Anamika really does deserve to be the winner though

I was thinking Rohan should win more deservingly, but then both of them were very close....

Though - really missed the talent of Sanchita, Abhro and Pawni from last year, in any of these kids!

I always supported her and wanted her to win :)

I wanted Rohan to winn, however Anamika deserves as well :]!

Congrats to all three love you! :)

14 years ago well im so happy for her..im so scared before the results but i knw it was it has to be anamika coz she i perfect singer,poet,human being, i hope she does more stuffs in the industry,well i dnt have zee tv but i have zee music i used to see backstage hungama so i used to like it.anamika rocksss:)