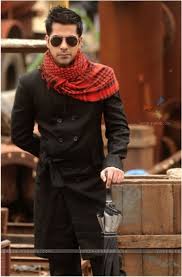 He will be coming in as superstar Abhay Kapoor in Nautanki Films Madhubala - Ek Ishq Ek Junoon on Colors and to make sure that Gunjan Utreja's entry gains maximum mileage, the makers have decided to give him a rocking entry. On the first day of shoot which was yesterday Gunjan was on sets for almost 17 hours at a stretch shooting most of the time.

Reporting to the sets on his second day of shoot Gunjan sounds more excited without any signs of exhaustion as he narrates his experience excitedly, "Yes, it is an out and out action sequence which will be my entry in the show. As per the story I am supposed to be shooting on the sets of my film which has action and stunts in it. It was all new for me since I have never done action earlier but I enjoyed it thoroughly. It was all about jumping around in the midst of gunfire, blasts, running in fire, chasing cars which was all in one shot using different camera angles. Everybody on the sets was freaked out but the satisfaction of doing it all is something else altogether. I am blessed to have such a grand entry on an already popular show... what more can one ask for?" says an exhilarated Gunjan about his dhamakedar entry in the show.

And has he started shooting with his co-star Drashti Dhami who is supposed to be shown as a big fan of Abhay Kapoor? "Yes, we did shoot for our first meeting together where we do come face to face but don't interact. I met Drashti for the first time on the sets and find her to be very sweet, beautiful and professional as a person. I had seen just couple of episodes of the show and never followed it so everything is like a fresh start for me."

While the audience will have to wait for the romance between the two which should follow soon, Gunjan gets talking about all the action he is doing now, and rewinds to his childhood days when he and his cousins used to do their own stunts, "As a child I remember doing stunt scenes with my cousin since we were big fans of Akshay Kumar and Ajay Devgn. We used to ape Ajay Devgn's standing on the bike entry scene by replacing the bike with a cycle, while for Akshay's stunts we used to come running fast and then jump on the bed. We have broken almost four beds in the house due to our love for action and got a nice beating for it too. But see, all that practice has come to use now!" laughs Gunjan who never dreamt that one day he will be doing something similar for a TV serial shoot.

What's more since he is being shown as a film star in the show it was almost as grand as shooting for a film, "Yes, it is almost like a film set up and is on a very grand scale. Even the character I am playing of Abhay Kapoor is quite zabardast with lots of shades to it. He is a star and a perfectionist but not arrogant. He is suave, charming, stylish at the same time well read, well-educated and very professional. He wants everyone to do their job well since he himself gives 200% to what he is doing and thus he gets upset if someone is complacent." 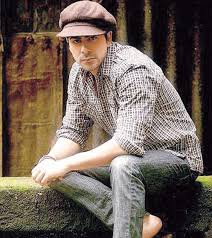 The show which took a twenty year leap will see Madhubala (Drashti Dhami) as an attractive 20 year old but what about Abhay Kapoor who was shown to be entering films at the time Madhu was born? "See, as per my belief Abhay Kapoor was only 17-18 years old so now he will be in his late thirties. The look that I have is also very lean and mean wearing casual yet smart T-shirts, waistcoats and jackets. Even in real life you cannot really tell that a Salman Khan or a Shah Rukh Khan looks older than say a Ranbir Kapoor or Ranveer Singh since nowadays everyone maintains themselves well these days. Same way I am shown to be all shaped up and hardly look more than 25! In fact, I believe that men don't grow old!" says Gunjan who has recently come out a winner in his fight of the battle of the bulge.

"I had suffered a fracture during the last schedule of Aamna Saamna - Investigative which meant that I could not exercise for the next six months leading to weight gain. I had become 80 kilos and last October when I started working out again I decided that I would take my fitness to a different level altogether. I am now 68 kilos and have lost body fat with my daily gym routine. The athletic built has now helped me while doing all the action stunts required for the shoot," explains Gunjan who has been rated amongst the top three anchors all over the world for live hosting.

However, Gunjan who started his TV career with the show Chhajje Chhajje Ka Pyar says that the actor in him is eager to do more, "I have been an anchor for the past 8 years hosting shows all over the world which meant I had to travel a lot and I was living out of a suitcase. However, now that I have got an opportunity to do fiction I wanted to do it since I am a trained actor after having done my Masters in Dramatics. During the 5 screen tests that I gave for this role I had to do 12 - 15 scenes which is when I realized that I can play with this character. Doosre ki zindagi jeena is a skill and an amazing art for an actor. Also now that everyone has accepted that I am not replacing Vivian Dsena but coming in as a new character I have been receiving lots of love and affection which I am thankful for."

We wish Gunjan all the very best and hope he takes the show too to new heights of success!

mcrazy4drashti 6 years ago Drashti Dhami loveee u my princess n

gunjan is improving day by day,,he ll surely b at his bessst soon :)

SmitaDDian 6 years ago Love you a lot Drashti Dhami :) Fortuitous 6 years ago drashti dhami u are the queen of indian tv!!

ishqMaanGeet 6 years ago GEET DRASHTI DHAMI you are the best... Watching Madhubala only for you but GU no sorry... Love you Drashti Dhami...