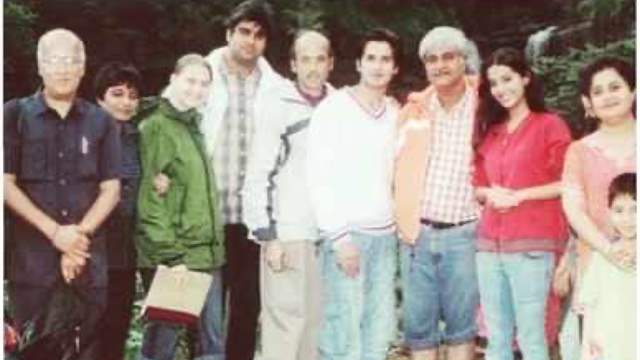 Filmmaker Sooraj Barjatya’s Vivah depicted the love story of Poonam and Prem, played by Amrita Rao and Shahid Kapoor respectively. The film became one of the biggest commercial successes of the year, grossing more than ?539 million worldwide.

As the film completes 14 glorious years, Amrita shared an unseen picture with co star Shahid and the team and penned a sweet note.

The actors looked unrecognisable in the throwback picture. Sharing the picture, Rao wrote, ''A Film that continues to become the Darling of the Nation. Thank you Sooraj ji. There are films and then there are Rajshri Films !! @rajshrifilms you continue to Celebrate Indian traditions and emotions like No one else. I Remember this day was the last day of shoot.. We shot at a waterfall in Lonavala... I was all of 19 and totally surrendered in good faith of my most wonderful director Sooraj Barjatya ...No one like him !!! I knew this was a Big Film but that it would reach this far in the hearts ?? of the audience comes as a wonderful blessing. On TV #Vivah has already broken the record of being the most played weekend movie.”

Recently, Amrita Rao had opened up about the link ups with co star Shahid Kapoor and shared that they were not even friends. “Shahid was always in a relationship when I was his co-star. Yes, the audience always wished that we were a ‘real-life couple’ but that had only got to do with our tremendous onscreen popularity. The funny part is that Shahid and I have only been very good colleagues, we were not even friends who hung out with each other. But yes, we have tremendous respect for each other as artists and recently Shahid also expressed on social media that he misses working with me, which was very sweet” she had told Times of India.

Meanwhile, Amrita Rao and husband RJ Anmol have named their baby boy Veer, and shared the happy news with their fans on social media.

Mira Rajput fires at hubby Shahid Kapoor for “Not doing a film which ...