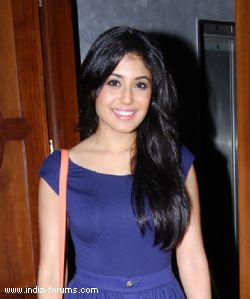 There has been news around for quite some time now that Vivaah fame Amrita Rao has given a look test for Shashi Sumeet Mittal Production's new show which will be aired on Star Plus. For the role, production house needed a college going girl who hails from Mathura.

We now hear that Amrita had given the look test for the role but the production house found her old enough to play a college going girl.

Now there is a buzz that these ace makers are considering the very chulbuli and bubbly Kritika Kamra for the role. Kritika Kamra was last seen and was loved enough for her stint on Colors' Jhalak Dikhhlaa Jaa Season 7.

As TellyBuzz earlier reported that three major Star Plus shows will be seen going off air anytime this year. If we get to see a show from such a production house with an amazing ensemble cast, we think the channel is taking a wise decision!

Well the star cast is yet to be finalized. We shall soon update on you guys with further developments of the show. Till then keep reading this space.

Rumours.. Yet again! Haven't signed any new show. So all "coming back to TV fiction" news - FALSE.

magical.Arjuhi 6 years ago Kritika is a brilliant actress with an adorable face. She can look 10 times more younger with her bubbly, chirpy attitude and child-like innocence. But don't think Kritika is doing this. She seemed really happy while tweeting about her new journey. Don't see anything to be so happy about a daily soap on Star Plus. She DEFINITELY deserves better. :-)

Lady_Impala 6 years ago amrita did shoot for the production house but not for a daily soap but an ad film.
anyways looking forward to seeing kritika in the new show.

-Drama_Queen- 6 years ago yayyy! Kritika and Karan back on tv!! :D
Karan in MTV Fanaah and Kritika in Star Plus' new show :D love you guys :)