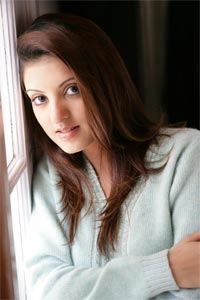 Amrita Prakash, the dark complexioned belle in the super hit film, Vivaah was seen playing a sexy model till recently, in the serial, Har Ghar Kuch Kehta Hai. The actress soon found that her role had nothing much to offer and decided to call it a quit. Now the girl is back to the big screen, and has signed two films, one for Rajshri Productions titled Ek Vivaah Aisi Bhi and another film for Sanjay Khandelawal called World of Fashion.


Amrita will be seen playing Isha Kopikkar's younger sister in The Rajshri Production film, which as presumed, is not a sequel of the film, Vivaah.
Amrita who has been in association with the Rajshris for quite a long time, says, "I could not deny the offer. They are such nice people and I have known them for so long. And I know I can always trust them with good quality work."

In the other film, The World of Fashion, that stars many newcomers, Amrita will play an aspiring designer from a small town.

Looks like Amrita has her plate full with offers!! -(SAMPURN)