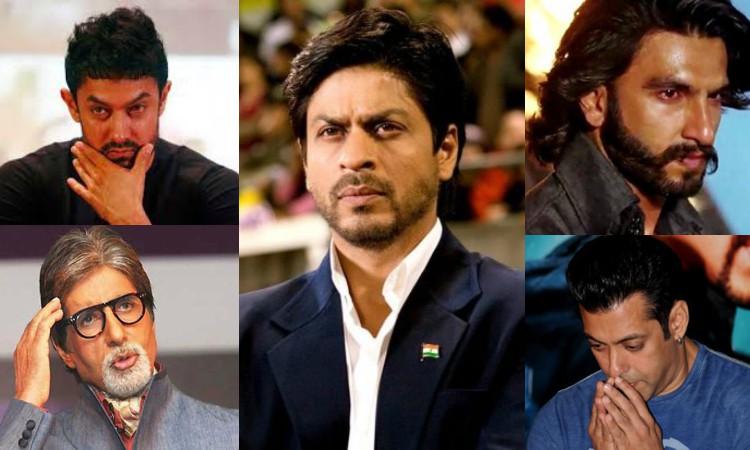 Bollywood stars described it as "barbaric", "tragic" and a "heinous crime against humanity". They said they were heartbroken with the news of the attack, which took place on Thursday.

In the worst ever terror attack in Jammu and Kashmir since militancy erupted in 1989, a suicide bomber on Thursday rammed his SUV packed with explosives into a CRPF bus on the Srinagar-Jammu highway in Pulwama district, killing at least 45 troopers and leaving the security establishment stunned.

Here's what the celebrities have tweeted:

Lata Mangeshkar: I condemn the terrorist attack in Jammu Kashmir's Pulwama district. I would like to pay a tribute to the martyrs. I am with the families of these soldiers in this moment of grief.

Shah Rukh Khan: Heartfelt condolences to the families of our valiant jawans. May the souls of our countrymen who laid their lives down for us rest in peace.

Salman Khan: My heart goes out for the jawans of our beloved country and their families who lost their lives as martyrs to save our families... You stand for India.

Aamir Khan: I am heartbroken to read about the terrorist attack on our CRPF jawans in Pulwama. It's so tragic. My heartfelt condolences to the families of the jawans who have lost their lives.

Ranveer Singh: Disgusted at the cowardly terror attack on the CRPF soldiers in Pulwama -- my sincere condolences to the families of our brave jawans. Saddened. Angry.

Hrithik Roshan: Deeply grieved on hearing about the Pulwama attack. My heartfelt condolences to the families of the jawans martyred.

Rajkummar Rao: Pulwama terror attack is a heinous crime against humanity. My condolences go out to the families of our soldiers who have lost their lives. May our martyrs rest in peace and the perpetrators of the crime brought to justice.

Neil Nitin Mukesh: My respects and condolences with the families Pulwama terror attack.

Saqib Saleem: Shocked and deeply saddened at the attack on our soldiers in Pulwama. Heart goes out to the families of the deceased soldiers. When will this hatred stop?

Disha Patani: Shocked! I salute and stand in solidarity with our Armed Forces. This deplorable act of cowardice and terror should be dealt with unforgiving urgency. No family should lose their sons like that, no soldier should be martyred like this. Deepest condolences to the families.

Juhi Chawla: Deeply saddened to hear the barbaric attack on our brave soldiers. My thoughts and prayers are with the families of the Bravehearts.

Goldie Behl: Terrible sights of the tragedy in Kashmir! My heart goes out to these jawans who were killed in a terrorist attack in Kashmir yesterday. Let us all pray for their bereaved families!

Kunal Kapoor: My heartfelt appeal to people, to come forward and support Ketto (a fund-raising organization) for their campaign to rehabilitate the families of CRPF martyrs. India lets stand up for those who gave their lives for our safety. Jai Hind.