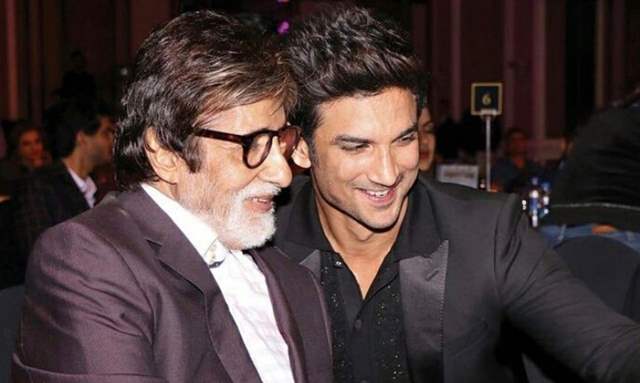 Bollywood celebrities are currently mourning the untimely death of actor Sushant Singh Rajput. While many have taken to their social media handle and shared their personal chats and conversations with the late actor, some recalled their last conversation with him.

The 34-year-old actor reportedly committed suicide. An ANI report stated that Sushant was depressed and had been taking treatment for the same. The case is being investigated by Mumbai police.

Meanwhile, fans and Bollywood celebs have been offering condolences to Sushant’s family. However, Amitabh Bachchan seems to be greatly taken aback by the sad news as he took to his social media account and mourned the untimely demise of the actor. Apart from that, he even dedicated a blog for the Chhichhori actor.

Amitabh Bachchan expressed his grief and recalled his conversation with the actor on his blog. He was even puzzled and terrified as to why had Sushant adopted such a move. The veteran actor was left wondering as he wrote, "Why ..  Why .. Why .. Why ..  Sushant Singh Rajput .. why do you end your life .. your brilliant talent .."

The 77-year-old actor even praised his talent and wrote, “your brilliant talent .. your brilliant mind .. laid to rest , without asking , seeking ..  why .. .. his work was sheer brilliance .. and his mind even more .. many a time did he express himself in the depth of philosophical verb .. they that looked passed it were either in wonder or oblivious of its strength of meaning .. some wondered, some quibbled .. to some it was a subdued mirth .. subdued because , for it to be given lethargic ignorance, would have opened the caves of their own .. .. his speak was measured .. as was his screen presence .. .."

Furthermore talking about Sushant’s character as Dhoni he added, "I saw a complete work of his in ‘DHONI’ .. the film was dressed with remarkable moments of his performance .. but three of the moments ever remained with me as an observer .. they were done with such casual conviction that it would be difficult for an analyst of some credibility, to either notice it , or give attention to its bearing .... when he spoke or communicated , there was something of an inner value, which had remained unsaid , yet said in its covered all .. its a trait of excessive intelligence .. and when that takes a diversion from the highway , it invariably ends up against a road bloc - depressive , unwanted , and in belligerent frustration .... on one of my meetings with him , I asked him how did he manage to give that iconic shot of Dhoni hitting a six winning the International tournament , to absolute perfection .. he said he saw that video of Dhoni , a hundred times .. !!.. that was the severity of his professional effort .... he came from humble beginnings .. was a part of the 4rth line group dancers, that performed shows with Shiamak Davar , the ingenious talented choreographer of our times ..  rising from those climes to where he was, is a story by itself .. excessiveness can often lead to extremes .. .. what kind of a mind leads one to suicide is an eternal mystery  .. .. to end a most gainful life,  is simply not permitted  .. AB."

Big B even shared a throwback picture with Sushant on his Instagram.

The news of the young actor's sudden demise has sent shock waves all across the nation. Many Bollywood actors including Shah Rukh Khan, Salman Khan, Katrina Kaif, Anushka Sharma, Sara Ali Khan, Janhvi Kapoor, and others have expressed their grief over Sushant Singh Rajput's death and extended condolences to his family.

“I don’t think that a CBI probe is required”: Maha Home Minister Anil ...

"Rhea is Being Subjected to a Bizarre & Dangerous Media ...
30 minutes ago