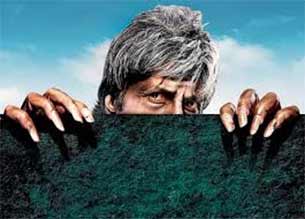 Megastar Amitabh Bachchan Tuesday unveiled the trailer of his much-awaited movie "Bhoothnath Returns" in the presence of the entire cast of the film.

Bachchan said he was thankful to T-Series to have approached him again for the sequel.

"I am thankful to T-Series to have approached me for the sequel again. This small kid Parth is the only one who can see me in the film. In this film, he is the hero and I am zero," Bachchan told reporters during the trailer launch.

"Bhootnath Returns" is a sequel to "Bhootnath" which was released in 2008.

Directed by Nitesh Tiwari, "Bhootnath Returns" features Bachchan, Boman Irani and Shahrukh Khan among others. It is slated for release April 11.