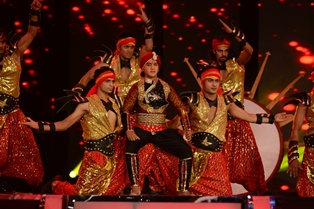 Sony Entertainment Television's popular quiz show Kaun Banega Crorepati's  new season is just a while  away from its telecast. Amidst thousands of admirers the show was shot live for the first ever time in Surat. Mesmerizing viewers with the grandeur and the scale of the show many celebs also performed keeping the entertainment level high through the evening.

One such talented actor is young Faisal l Khan who performed in his Kunwar Pratap avatar leaving the audiences shocked with his stunts and dancing skills. His performance was highly appreciated by the live audiences.

Though the biggest compliment for Faisal came from the legend himself Mr.Amitabh Bachchan. Faisal who was also rehearsing for his performance in Surat had never met Mr. Bachchan before. But as destiny had it, AB praised the young boy and appreciated his dedication and his work on Bharat Ka Veer Putra - Maharana Pratap.

Recounting his experience an elated Faisal said, "I had always wanted to meet the great Amitabh Bachchan. But when I saw how busy he was himself with all the preparations and rehearsals for the Surat event, I thought I will not get an opportunity this time. Yet one of the crew members made it possible and once I was in front of him I had no words! Mr. Bachchan appreciated my role as Pratap and also mentioned that he watches my show Maharana Pratap. His blessings mean a lot and I will cherish each and every moment of that day!"

..Pankhudi.. 6 years ago Love you faisal you rock

Droolicious 6 years ago Faisal is a rock star

-Magnanimous- 6 years ago you are the BEST Faisal!
Faisal khan rocks!

_GurIkaholic_ 6 years ago Faisal khan is the best love him totally .

Fiery 6 years ago Faisal Khan love you
Waiting for ur performance .

..Pankhudi.. 6 years ago Praising from Mr. bachchan means a lot Faisal and you got that because you are excellent actor . Love you to the core .

KratikaTheDiva. 6 years ago Faisal love you