The actor will be featured in the flashback story of the lead girl Sara, who is now an actress. 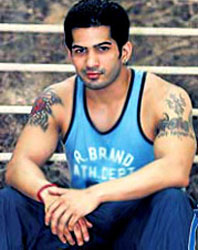 Featured Video
The flashback goes back to the days when the actress Sara was the small town girl, Jyoti Ahuja. According to our source, "Amit Tandon plays Dev, the Super star who wins the heart of Jyoti, and the girl who is deeply in love with the actor decides to leave her home for him. But to her utter shock, she finds out in the local newspaper that the star is actually going around with an actress. Jyoti who is now pregnant with Dev's child ultimately discovers the bitter truth that he is a big time flirt and does not love her at all. Her life takes a dramatic turn after this incident".

When asked Amit Tandon about the experience of working with a big Director like Vikram Bhatt, he said, "It's a pleasure working with such a great director. The shoot was very interesting; in fact the whole story was shot just like a film. It was a nice opportunity to show my skills at that level and also learn to do better at the same time".

Though the actor did not talk much about the story line, he quips, ""The story is about the woman who is a struggler in this industry, and how I will be playing an important part in her life".

Shauhrat Nafrat Aur Showbiz is aired every Tuesday at 10 PM slot on Sony.

A treat for Amit Tandon fans for sure, to watch him as the Superstar Dev now!!