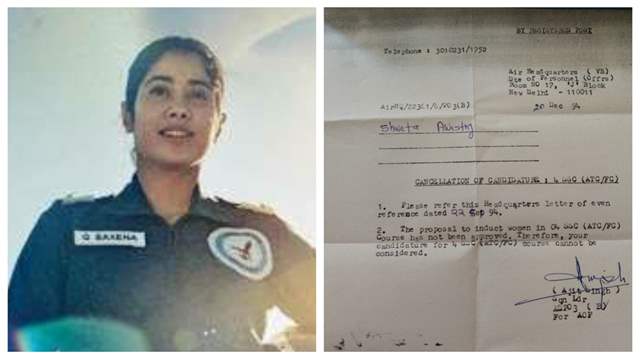 It is no secret how the talking points and constant saga over the last couple of months has been that of the mysterious case of Sushant Singh Rajput's demise. However, the by product of that topic has been the debate of nepotism and that further resulted in a corner surrounding Gunjan Saxena: The Kargil Girl.

From slamming the film because it stars Jahnvi Kapoor to rating it poorly on IMDb, the film has certainly had its fair share of controversies. Independent of these ones, a fresh controversy popped up only recently when the Indian Air Force wrote a letter to the Censor Board objecting to its "undue negative" portrayal in the movie. The film is based on Flight Lieutenant Gunjan Saxena who became the first Indian woman to fly in a combat zone during the 1999 Kargil War.

The film highlights how the IAF wasn't gender neutral back then and Saxena had to fight multiple odds to make her own place in a field which primarily recruited only men. Shedding some light on the topic and putting forward a take, former Army Officer Captain Shweta Misra took to Twitter to share a glimpse of the letter she had received back in 1994 when the IAF wasn't inducting women into service. The letter reads, "The proposal to induct women in 04 SSC (ATC/FC) Course has not been approved."

Interestingly, real life Saxena recently said that she was lucky to have the support of commanding officers and supervisors in the Indian Air Force. "Whenever you are in any kind of environment, there are different kinds of individuals that make up that environment so when there is a major change happening, some of these individuals are ready to accept this change more readily than the others and some take more time to adjust to this change," she had said in a statement.

luvumjht 2 months ago This Bollywood is so shameless, for publicity of a garbage film, now they are trying to gain publicity from army personnel. PR gimmicks need to end now.