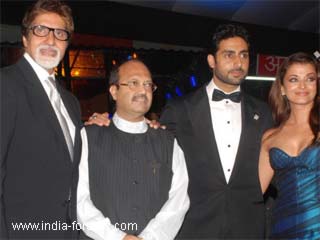 Mumbai, Nov 16 Former Samajwadi Party leader Amar Singh was one of the first ones to visit to Aishwarya Rai Bachchan and Abhishek Bachchan's baby girl Wednesday.

Dressed in a white kurta and pyjama, Singh came to the Seven Hills Hospital escorted by his driver and bodyguard and headed straight for the fifth floor of the building, where Aishwarya was admitted.

A few minutes later, Singh was seen heading back to his car accompanied by Amitabh Bachchan himself, who headed back to the fifth floor of the hospital after bidding his friend good-bye.

Amar Singh, 55, facing prosecution in the 2008 cash-for-votes scandal, was given permission to visit Singapore Nov 8-30 after he was discharged from the All India Institute of Medical Sciences (AIIMS) Nov 1.

Among the other visitors were filmmaker Goldie Behl accompanied by his actress wife Sonali Bendre and filmmakers Apoorva Lakhia and Bunty Walia.

Police personnel could be seen from half a kilometer ahead of the hospital as tight security was maintained at the Seven Hills Hospital.

However, the paparazzi set up their cameras behind the walls of the seven-star hospital, overlooking the building where the Bachchans booked three rooms -- one for Aishwarya, the other for the Bachchan family and the third for the Rai family. The entire floor was kept out of bounds for all except the two families.

Aishwarya was admitted to the hospital Monday night, according to her spokesperson.

The girl is Amitabh and Jaya Bachchan's third grandchild, after Agastya and Navya Naveli -- children of his daughter Shweta and son-in-law Nikhil Nanda.